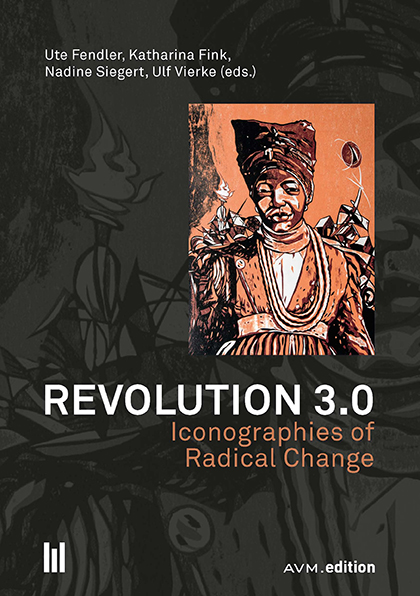 From the visual politics of the FRELIMO-liberation script in Mozambique via the brooms and spoons of Le Balai Citoyen in Burkina Faso, to the updating of images from past revolutions on Twitter and Facebook, often in the diaspora – images play a key role in the envisioning of futures and social utopia. And more than that: Revolutions, understood as moments of radical social and cultural change, are driven by images, as empirical investigations on- and offline show. But what actually constitutes the ‘seismographic power’ of images, and the sustainability of icons from past ruptures in terms of radicalism, such as the portraits of Burkina Faso’s and Mozambiques first presidents‚ Thomas Sankara and Samora Machel? What possibilities do images offer – and what is cut and edited in the process of creating a ‘new’ image? How do the visual tactics of analogue and digital protesters alike constitute, alter and create visual and multi-media archives?
This book brings together a wide range of papers by international researchers and artists focusing on the relationship of images and revolution mostly in the African context. Images in various artistic media such as photography, art in public space, performance, fashion are discussed, but also the relation of visual culture and politics in Mozambique, Angola and Burkina Faso among others. 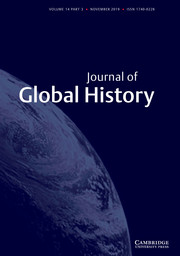 Founded in Moscow in 1960 for students from Third World countries, the Peoples’ Friendship University ‘Patrice Lumumba’ was the most important venture in international higher education during the Cold War and a flagship of Soviet internationalism. It aimed to educate a Soviet-friendly intelligentsia and foster a Soviet–Third World alliance. This article retraces the history of this school, often criticized for its Third World concept, recruitment, and training policies. It recalls the forgotten French initiative to create a university for the underdeveloped countries, situates Lumumba University in the global Cold War, and compares it with mainstream Soviet schools. Soon after its creation, Lumumba University underwent important changes, but departed from its initial educational concept. Consequently, arguments justifying the existence of a special university disappeared. Third World countries, moreover, never agreed with the university’s concept. Despite its educational accomplishments, Lumumba University became the Achilles’ heel of Soviet cultural policy. 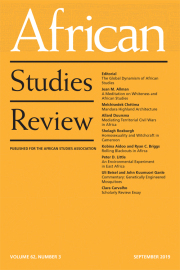 This commentary discusses the current release of genetically engineered mosquitoes in Burkina Faso as part of malaria control interventions. We explore three key issues relating to the releases, namely firstly the question if the scientific intervention is safe and sound, secondly if public engagement measure were genuine and sufficient, and thirdly the question of how the biotechnical innovation relates to other malaria control interventions. We close with some reflections on trust in biomedicine and how this can be fostered in processes of biomedical trials on the African continent. 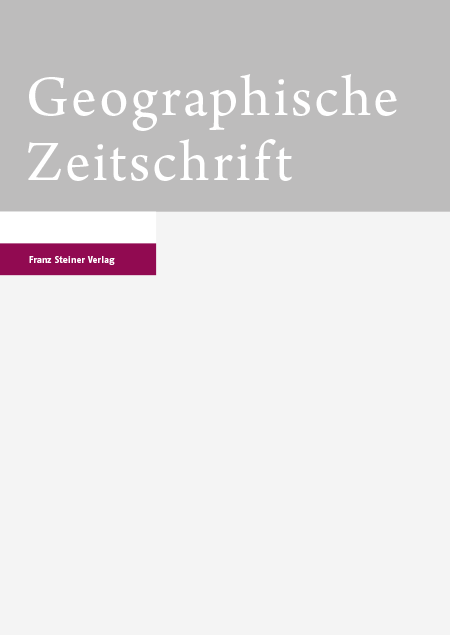 Current debates in urban studies are questioning the theoretical and empirical adequacy of the term city for understanding urban dynamics, North and South. A related concern is the arbitrariness of delimitations of expanding, interwoven and hyper-connected agglomerations. Established regionalizations of urban areas or cities are thus fading away in more than one sense, demanding conceptual and methodological consequences. Building on these debates, the paper stresses the relevance of societal or socio-spatial dimensions of urbanity. The need to contextualize them across scales finds its expression in the term global urban society. Taking this idea further, we propose a research programme centred on a conceptual and empirical investigation of a relational urbanity. 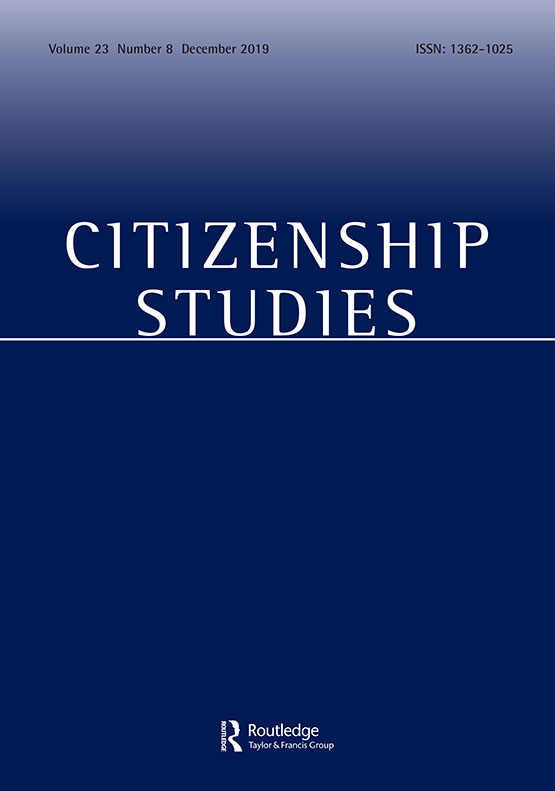 What have affirmative action policies, categorization of care needs, plastic surgery, forensic identification of dead bodies and age assessments of refugees in common? They all determine recognition and access to resources and rights via the body. In the introduction to this special issue, the editors emphasize that the body only becomes distinct and significant when it is put in relation to historically and geographically differing norms and standards. This relational approach opens up the ‘black boxes’ of science, medicine, bureaucracy and eventually the body. Drawing on practice theory, critical citizenship studies and Science and Technology Studies, the authors discuss notions of social citizenship and the conceptualization of biological citizenship in medical anthropology. They think with the contributions of the special issue that analyse how medical practitioners, state and private institutions, as well as individuals enact certain bodies in specific material and discursive constellations. By taking neither citizenship nor the body for granted, the special issue shows how situationally-bound elements in relations, space and time, matter for a person’s access to rights and resources – and hence can draw attention to blind spots in particular categorization practices.

Neubert, Dieter: "What We Can Learn from the Fading Myth of the (African) “Middle Class” "Hide 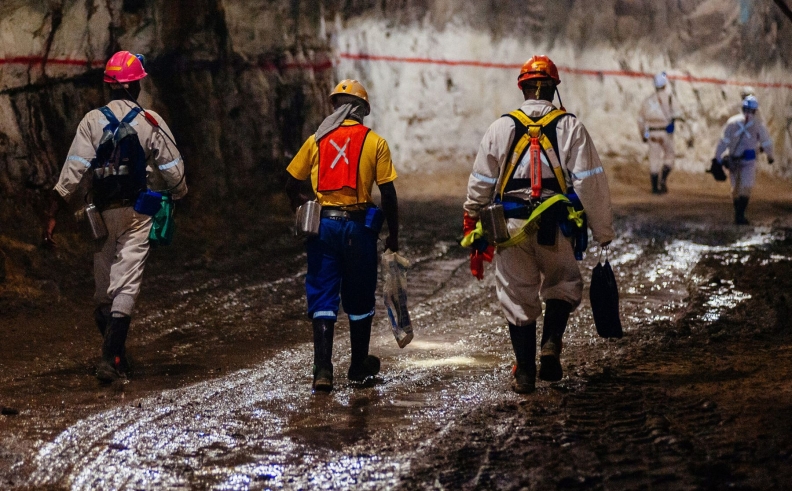 Less than ten years ago we observed a kind of media hype over the “new” middle class in Asia, Latin America, and Africa. This was considered as a large new group of consumers and the most optimistic researchers underlined that they would also be the backbone of a new global movement towards democracy and good governance (Birdsall 2016). Indeed, income figures justify the idea that there is a growing group of people who have climbed above the US $2.00 per capita/day poverty line. And in Asia and Latin America a considerable part of the population has a per capita income of ten or even twenty US dollars a day. In times of growing critique in post-development and post-colonial studies of development policy, including critique of the concept of “development” itself, this global middle class seems to verify the success of the concept of economic development and economic growth.

The title of the volume “Future Africa—beyond the nation?” has several implications. Nation is presented as an entity relevant to identiﬁcation and identity; and in the combination with “future”, nation implies a political vision. It is not hard to ﬁnd good examples in respect of these implications. However, there are other entities important for to political identiﬁcation. Often, they do not go beyond the nation but refer to smaller collective identities, such as ethnicity. The revived debate on “the middle class” implies that particular social groupings, such as class, may play a role, too. The question is how relevant are the nation and other collective political identities in Africa, and are they exclusive? Looking at the case of Kenya, we see on the one hand that collective (political) identities, such as ethnicity, are mobilized especially during elections. On the other hand, these collective identities are less dominant in everyday life and give way to diﬀerent conducts of life (conceptualized as “milieus”) that are less politicized. We see people maneuvering between multiple “we’s”. Strong political identities are mobilized only in particular conﬂict-loaded situations that restructure identities in simple binary oppositions of “we” and “they”.

The debate on different forms of political mobilization and self-organization in Africa refers to the established concepts of civil society and social movements. Knowing that the majority of studies on civil society and social movements focus on the Global North, we ask whether these concepts may be applied to Africa. We need to consider different forms of self-organization and the potential limits of the concepts. At the same time, ‘unusual cases’ from Africa may help us to sharpen our understanding of the concepts and to explore their analytical range and borders. This applies particularly to the observation that the terms civil society and social movement are often used interchangeably, which ignores the existing differences between the concepts. Therefore, we first consider their different perspectives: A study of civil society analyses the features of associations in a public sphere or arena and their role in politics and society. A study of social movements looks at processes of mobilization and action. Second, we point out the normative implications of the two concepts, especially with regard to liberal democracy, degree of politicization and relation to violence.