Karakul Circulations: Colonial Economies and the Un_Making of Disciplinary Knowledges in Germany and Namibia

Karakul Circulations: Colonial Economies and the Un_Making of Disciplinary Knowledges in Germany and Namibia 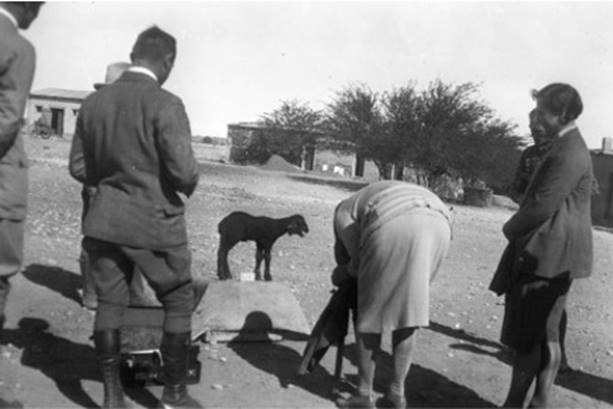 Human-animal relations play an important role in colonial histories. Domestic animals such as sheep have had a profound impact on colonial and postcolonial landscapes, politics and epistemic practices.

In our project, we are interested in the circulations of people, sheep and knowledges in and through post_colonial spaces and timescales. These Karakul circulations mark and transgress boundaries of race and species in multiple ways. Bred on an experimental farm in Halle (Germany) in the early 1900s, the sheep were exported to the colony of South-West Africa, where they played a major role in colonial settlement and economies. They were also crucial agents in scientific controversies on agriculture, Mendelian genetics and race. In our project, we approach these circulations through different sets of relations. In spatial terms, Karakul sheep connect Germany, colonial South-West Africa, Namibia and South Africa with other regions in the world. They are embedded in specific articulations of power and violence. Temporal circulations bring together German colonialism, South African imperial rule, colonial revisionism in Nazi Germany as well as heritage debates in independent Namibia. Karakul circulations also refer to traveling knowledges, their performed boundary work as well as the silences and absences they represent. Through our transdisciplinary approach we analyze the relations between bodies (human and sheep), representations (documents, scientific publications and memories) and knowledges (local, tacit, taxonomic, scientific and silenced). We discuss the ways in which Karakul circulations were instrumental in producing a racialized or nonhuman other, while simultaneously challenging conventional species boundaries. We pay particular attention to the multi-directional pathways and fluid forms of knowledges, thereby contributing to the conceptualization of Africa as multiple. The project conjoins historical and ethnographic research with theoretical approaches in feminist and postcolonial STS and creative artistic approaches. It thus contributes to the core-themes of the RS Knowledges, examining multiple processes of the making and unmaking of knowledges as well as their particular scopes and scales.