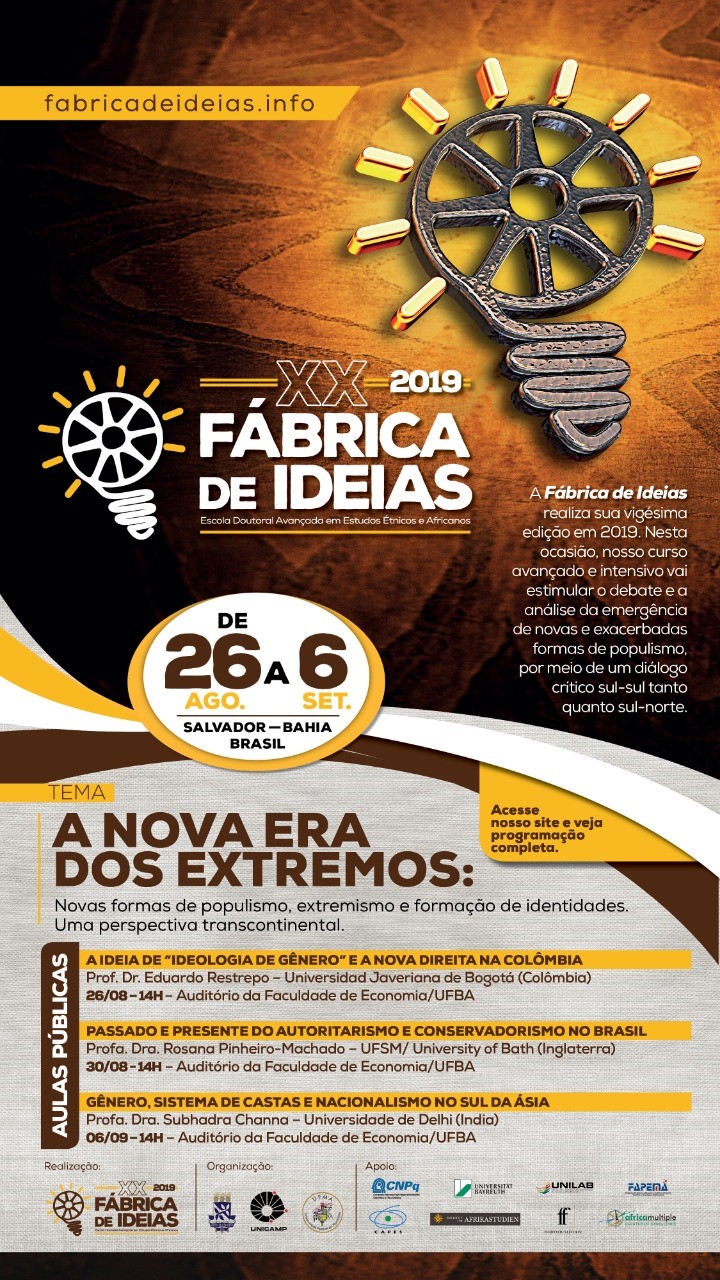 The New Era of Extremes in Transcontinental Perspective: Populism, Extremism and Identity Formation in Multiple and Relational Contexts and Temporalities.

The Factory of Ideas will hold its twentieth edition in 2019. In our next edition, our intensive and advanced course aims at stimulating the debate and analysis of the surge of new and exaggerated forms of populism, through a progressive South-South as well as South-North dialogue. This year we will cooperate with the Cluster of Excellence “Africa Multiple - Reconfiguring African Studies”. Some of the key concepts of this new Research program are multiplicity and relationality which are also at the heart of our Factory 2019, as it deals with questions of multiple forms of extremism in politics in different contexts. The summer school will offer the context for an exchange of different case studies in a South-South perspective as well as with some reference points in the North. The fact that politics in extreme formats recur - even in different forms - will also stir the question about cycles of political discourses and the temporalities that can be questioned.

These forms to make politics and exercise power present themselves as absolutely new and anti-political, and hint at radical reforms of both the social-economic and cultural-religious-educational sort. They oppose outright previous projects aimed at reducing poverty as well as extreme and durable inequality, as well as more conventional narratives based on class. To the latter vision of society mostly centred on forms of “mosaic emancipation” or “identity welfare”, they oppose new us-them confrontations based – mostly - on lifestyle, religious belief, celebration of family life or nationhood. It is urgent to investigate how the new populist governments affect and possibly alter the structure of inequality, the process of identity and class formation of subaltern groups and the building of broader types of collective identities. Which are winners and the losers in theses process? In doing this we need to scrutinize the context of different temporalities in various relevant countries (India, Philippines, Colombia, US, Brazil, Mozambique, Nigeria, Burkina Faso, countries in Europe and so forth). We also need to focus on the multiplicity and relationality of context, for instance, on the traditional or new means and technologies that are deployed (social media, church pulpits, flash mobs etc.) plus identify the various codes and registers in use (religion, politics, the production of culture and discourse leading to violence against strangers, foreigners, or LGBT people). Doctoral students and postdoctoral fellows will be asked to give one lecture relating their research topic and regional focus to the theme of the Factory of Ideas, so as to socialize with other students and lectures and advance in building collectively and transnational, multiple and relational perspective on the issue.

On occasion of its twentieth edition we will also hold a one-day panel with a selected number of our former students that are now professors in various universities. The aim of the panel is to scrutinize this twenty years’ experience and envision the future of our project and South-South network. Such reflection is especially relevant in the light of the dramatic change that one can anticipate in the politics and funding of higher education and academic life in our countries.

Our provisional program, to be completed soon, include short courses delivered by:

Other scholars from Brazil and abroad might be invited.

Each of them will give classes in intensive fashion, for a total amount of 68 class hours, which correspond to four credit in the Brazilian Graduate Education system. Classes and debates will be held in Portuguese, English and Spanish, and will be thoroughly recorded and broadcast on line. An edited version of the recordings will be later made available for all the graduate programs that partner in the organization of the Factory of Ideas. A reading packet will be made available in PDF format to the selected students. An edited selection of the papers presented by the lecturers and the students will be published in a special issue of the journal Mediações of the University of Londrina (UEL). An important component of the Factory of Ideas is the discussion in small groups, under the leadership of one or two of the lecturers, of the students’ research projects. Students are advised to present their projects, dissertations or theses in paper format.

Up to 45 graduate students and postdocs will be selected through an international selection process. Up to fifteen vacancies will be reserved for students from Africa, Asia, Europe and North America. A special effort will be made for guaranteeing the presence of students who benefit from affirmative action measures, native Americans, descendants of maroon communities and LGBT activists, because all of them in their research are exposed and vulnerable to tension and aggression. Students based in minor and less central universities are especially welcome. There is no tuition fee and the students will be advised as to inexpensive accommodation and restaurants.

The call for the course and the time schedule of the selection process is available in our website www.fabricadeideias.info as well as in the sites of our partners. Deadline for international students applying through the cluster is July 1.