From August to October 2020 the chair of African Legal Studies at the University of Bayreuth hosted a series of debates on various aspects of the main topic “Human Rights in Africa”. The events were supported by the Africa Multiple Cluster of Excellence.

In summer 2020, the chair of African Legal Studies at the University of Bayreuth and the Africa Multiple Cluster of Excellence presented a digital series of events titled “Everyone’s human rights - A series of debates on human rights in Africa”. Held for the first time, the series comprised five lectures – each followed by a discussion – and presented many diverse and interdisciplinary perspectives on the topic. 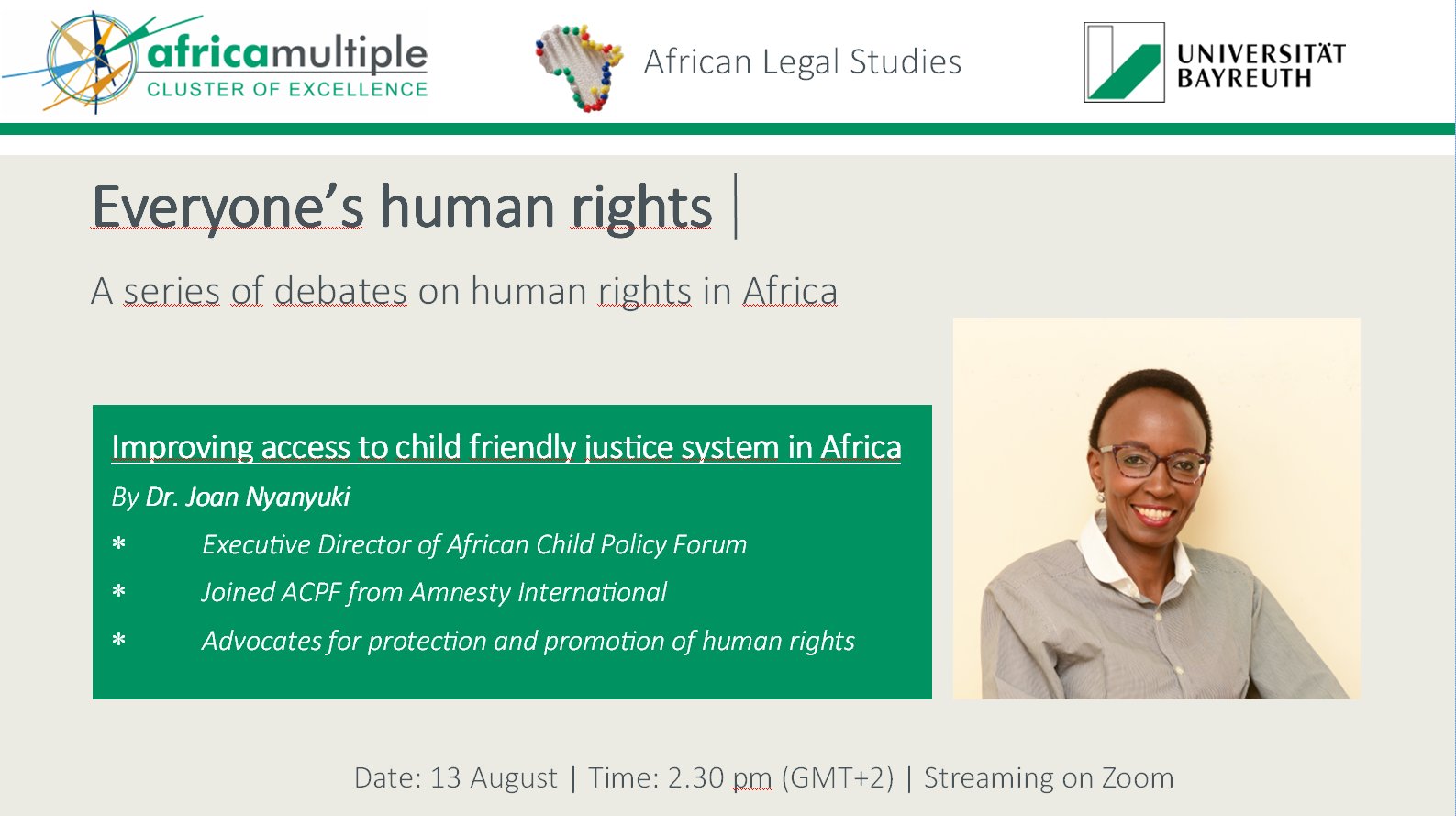 The series was kicked off by Dr Joan Nyanyuki, Executive Director of the African Child Forum in Ethiopia, talking about “Improving access to child friendly justice system in Africa”. In an interesting and informative presentation, she showcased the challenges that children on the African continent are frequently confronted with. The national legislature does not offer sufficient support for minors – especially not on a legal basis. In numerous examples, Dr Nyanyuki presented a few possible approaches to make the judiciary system more child-friendly. A lively and intense discussion completed the presentation providing an additional context for the topic of a child-friendly judiciary system. 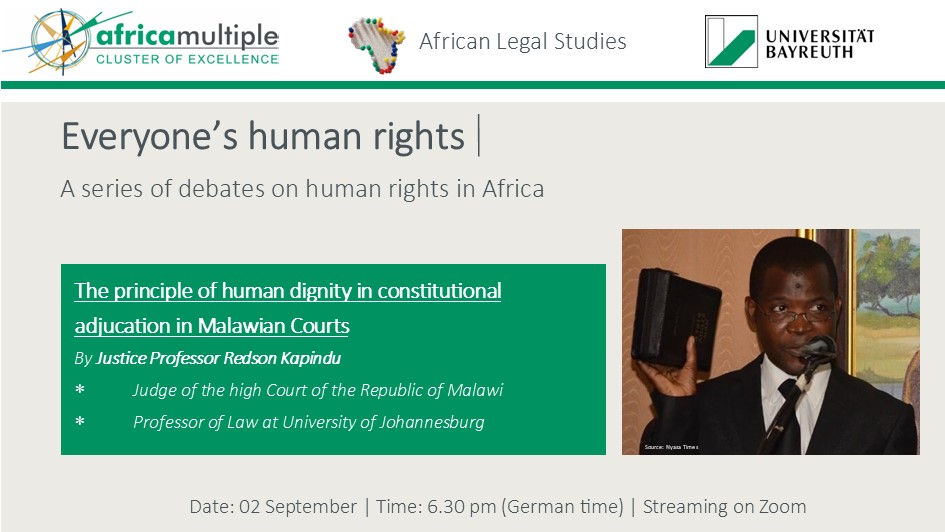 In the second debate, Redson Kapindu, judge at the High Court of Malawi and professor at the University of Johannesburg, focused on the topic “The principle of human dignity in constitutional adjudication in Malawian courts”. In his speech he gave an interesting overview of Malawian and South African cases in which  courts have applied the principle  of human dignity. Additionally, Kapindu discussed the concept of human dignity in relation to the “Ubuntu” philosophy which is mainly known in Southern Africa. 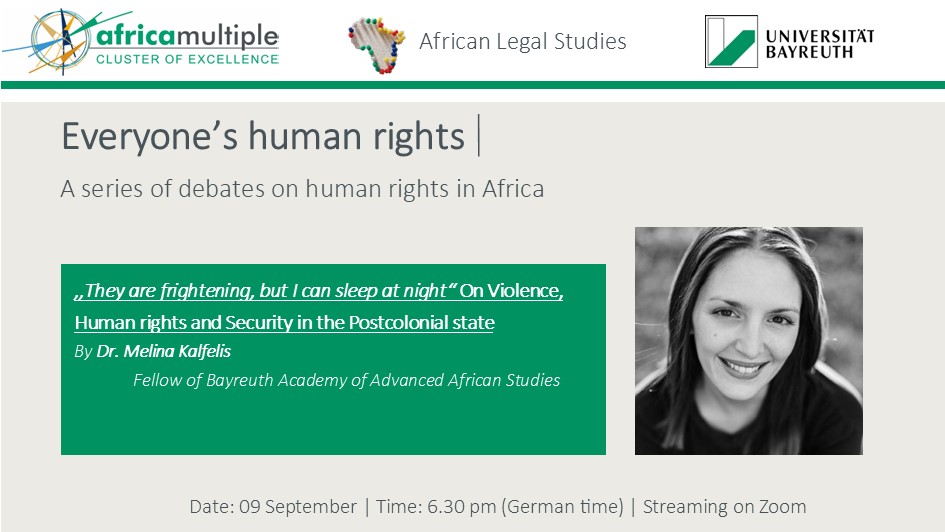 The third speaker, Dr. Melina Kalfelis, member of the Bayreuth Academy of Advanced African Studies, spoke about “They are frightening, but I can sleep at night. On Violence, Human Rights and Security in the Postcolonial State”. The anthropologist described her current research on and experience with the group of “Koglweogo”, a self-defence group establishing forms of extra-legal governance in Burkina Faso. She specifically emphasized that the network of Koglweogos contribute to both the interruption and the re-production of structural violence. The lively discussion that ensued tackled various questions on the classification of the resulting human rights violations committed by these groups and on the relation of the Koglweogo with the national government. 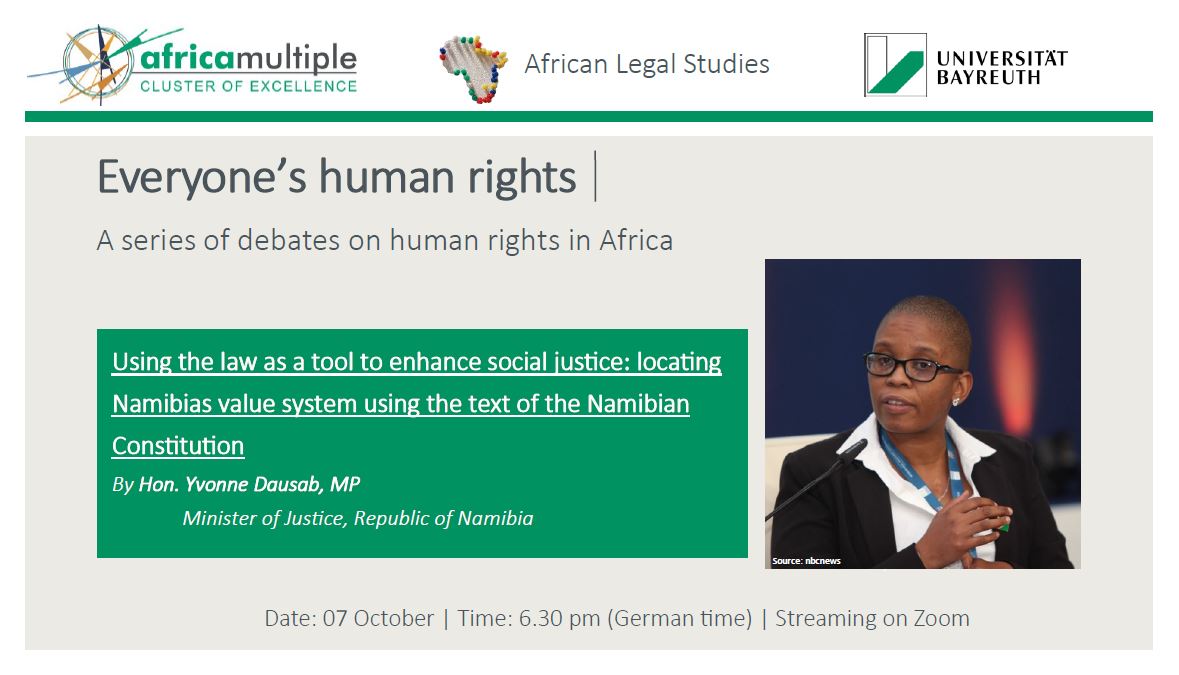 Yvonne Dausab, Minister of Justice of the Republic of Namibia, continued the series and spoke about “Using the law as a tool to enhance social justice: locating Namibia’s value system using the text of the Namibian Constitution”. The main question of the evening was, why and how law may be used to encourage social justice. The Minister of Justice emphasized the necessity of broad trans-sectoral solutions and the inclusion of the Namibian value system. 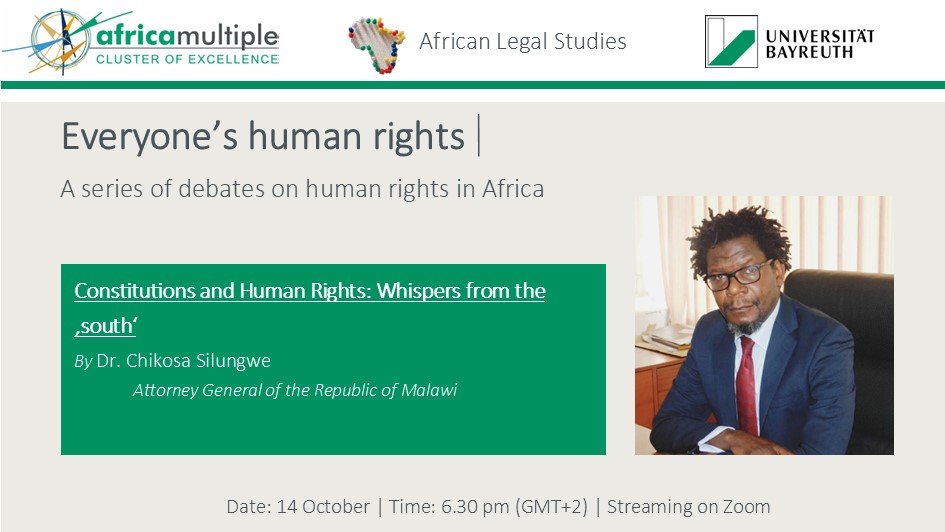 Last but not least, Dr Chikosa Silungwe, General State Attorney of the Republic of Malawi, rounded off the series with his talk on “Constitutions and Human Rights: Whispers from the ‘South’”. He especially focused on the Malawian presidential elections in 2019/20 by drawing conclusions and principles from the election as well as the corresponding decision of the constitutional court.

Especially, the extensive, fruitful and interdisciplinary discussions after each presentation provided a frame for close and informal exchanges between all participants and was described as “academically stimulating” by judge Redson Kapindu.