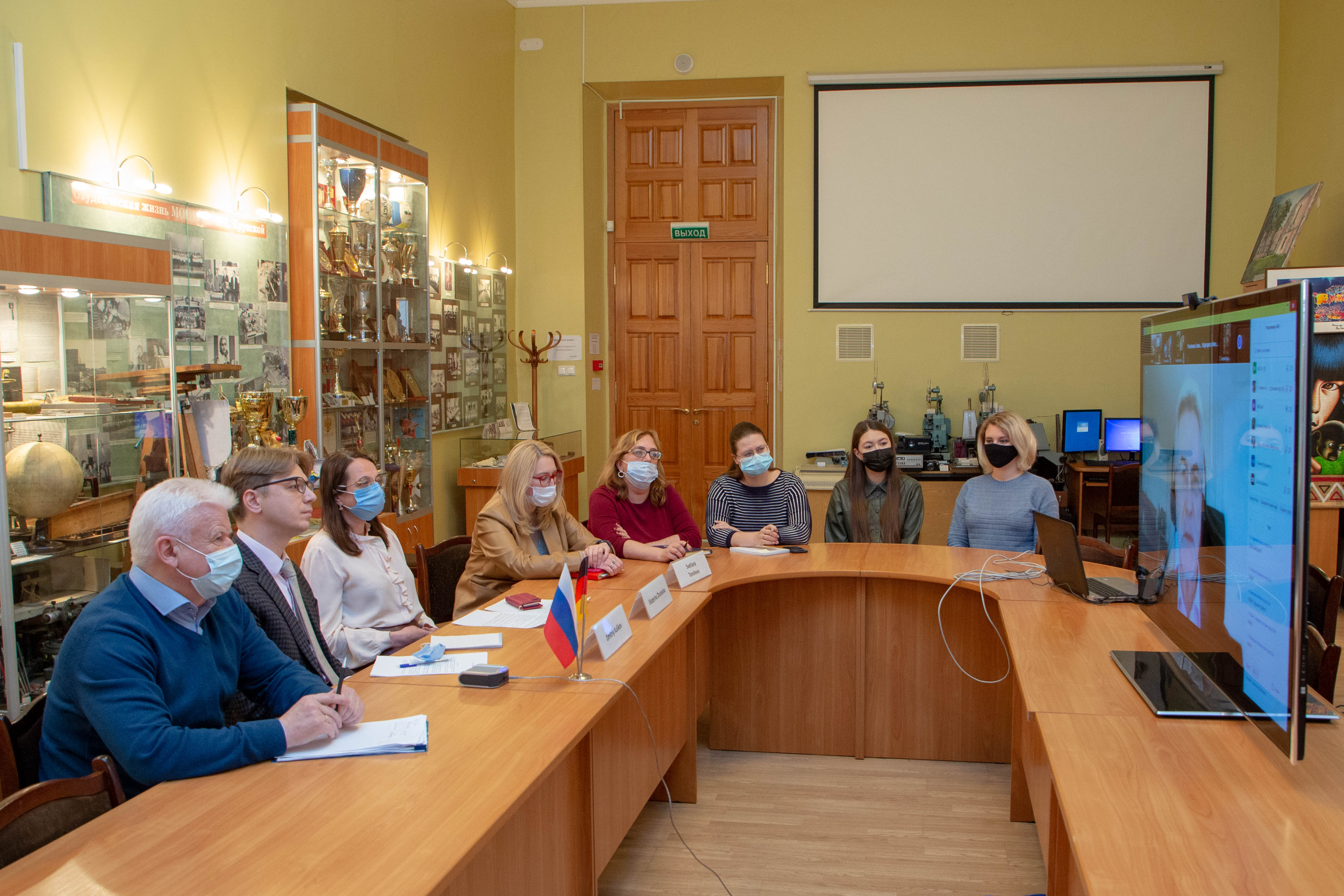 The lecture management board in the Vice-Rector's conference room

Prof. Dr. Michael Steppat, a member of the RS Knowledges, was invited by Moscow Region State University (MGOU) to speak about “The Excellence Strategy: Cutting-Edge Research in Germany?” in December. The event was arranged by the Vice-Rector for Research (Dmitriy Kulikov), the director of the Science Development Department (Ekaterina Yuravina), and the director of the International Cooperation Department (Svetlana Tonsheva). The department of Planning and Accounting for Research Activities was active in handling organizational matters. Established in 1931 and located in the national capital, the MGOU is the largest university in the Moscow Region, with currently about 12,000 students. It offers all degree levels, including the doctorate, in Arts & Humanities, Business & Social Sciences, Language & Cultural Studies, and Science & Technology. As its International Cooperation Department says, “Inviting highly qualified international professors is one of the priorities in the development of MGOU’s international activity.”

Concerning the Excellence Strategy, over 100 people had registered their interest in the lecture when it was announced, and 75 audience members participated actively. An elite universities project is being expanded in the Russian Federation, the Project 5-100, and the lecture was designed as an opportunity to begin discussing points of comparison and contrast with Germany. In a molecular biology context, a few years ago Frank Gannon noted that “scientists rarely use the word ‘elite’ without some apologetic justification”, and this is a starting point for debating the pros and cons of excellence selections. The lecture outlined how and why the original Excellence Initiative came into being in Germany and how it was superseded by the present model, how its funding relates to normal research support, and why there is an ongoing debate about whether ExStra enables a “decisive boost for cutting-edge research” or “jeopardizes successful higher education”. A further issue is whether a focus on research excellence is justified, separated from the federal Innovation in Higher Education Teaching program. The often lacking incentives to entice academic faculty to engage at all in interdisciplinary cooperation is a further aspect of the debate.

As a key feature, the lecture introduced Bayreuth’s Excellence concept in order to exemplify what an officially approved Cluster needs to demonstrate, structurally, and to give an illustration of how a successful concept should look when it translates into practice. The ensuing discussion focused on how the concept can serve to motivate students and faculty to take a heightened interest in Excellence research. (The photo shows the lecture management board at MGOU.)

Prof. Steppat was previously invited to lecture on “Modern Literary Theory in a Cultural Context”, and has been offered a more regular guest professor status at MGOU. At another institution, Moscow City University, he has been asked to follow up an international colloquium with the Excellence Strategy topic in January.