Six years ago, the founders of DjumbaiALA created a network committed to enhancing intercultural conversations and a non-hierarchical co-production of knowledge in the Global South. Now, the project has been awarded a grant by the BMBF.

Earlier this month, an encouraging message with the subject matter “ideas competition of the BMBF Brazil Day – good news” dropped into the DjumbaiALA email box. It announced that the German Ministry of Education and Research (BMBF) decided to support the project “Dialogues of African and Afro-diasporic Knowledges in a Multimedia Era” proposed by Valerie Gruber, Diana Mignano, Gilbert Shang Ndi and Cláudio Manoel Duarte de Souza. The grant will enable the DjumbaiALA team to organize a workshop in Salvador da Bahia (Brazil) as soon as the Corona situation allows for a safe and sane encounter.

DjumbaiALA is an initiative that aims at combining transdisciplinary knowledge transfer with creative multimedia communication to build bridges between Africa and Latin America, as well as between academia and civil society. It is based on an open network of academics, artists and activists interested in (re)connecting both shores of the Atlantic through actual and virtual dialogues, open access publications and forms of collaboration that transcend ivory tower hierarchies. Based on their prior work in setting up and editing the homepage www.djumbaiala.com, Valerie Gruber (BIGSAS Junior Fellow and member of the Cluster’s Research Section Moralities), Diana Mignano (BIGSAS Junior Fellow and coordinator of Education Monitoring at the Municipality of Bayreuth), Gilbert Shang Ndi (postdoc in Comparative Literature and member of the Cluster’s Research Section Arts and Aesthetics), and Cláudio Manoel Duarte de Souza (lecturer at the Centre of Culture, Languages and Applied Technologies – CECULT of the Federal University of Recôncavo da Bahia – UFRB) joined forces to participate in the ideas competition of the BMBF Brazil Day (Brasilientag) in early 2020. The call invited doctoral researchers and postdocs who finished their PhD less than 10 years ago to develop innovative projects that lay the ground for long-term research partnerships between Brazil and Germany. 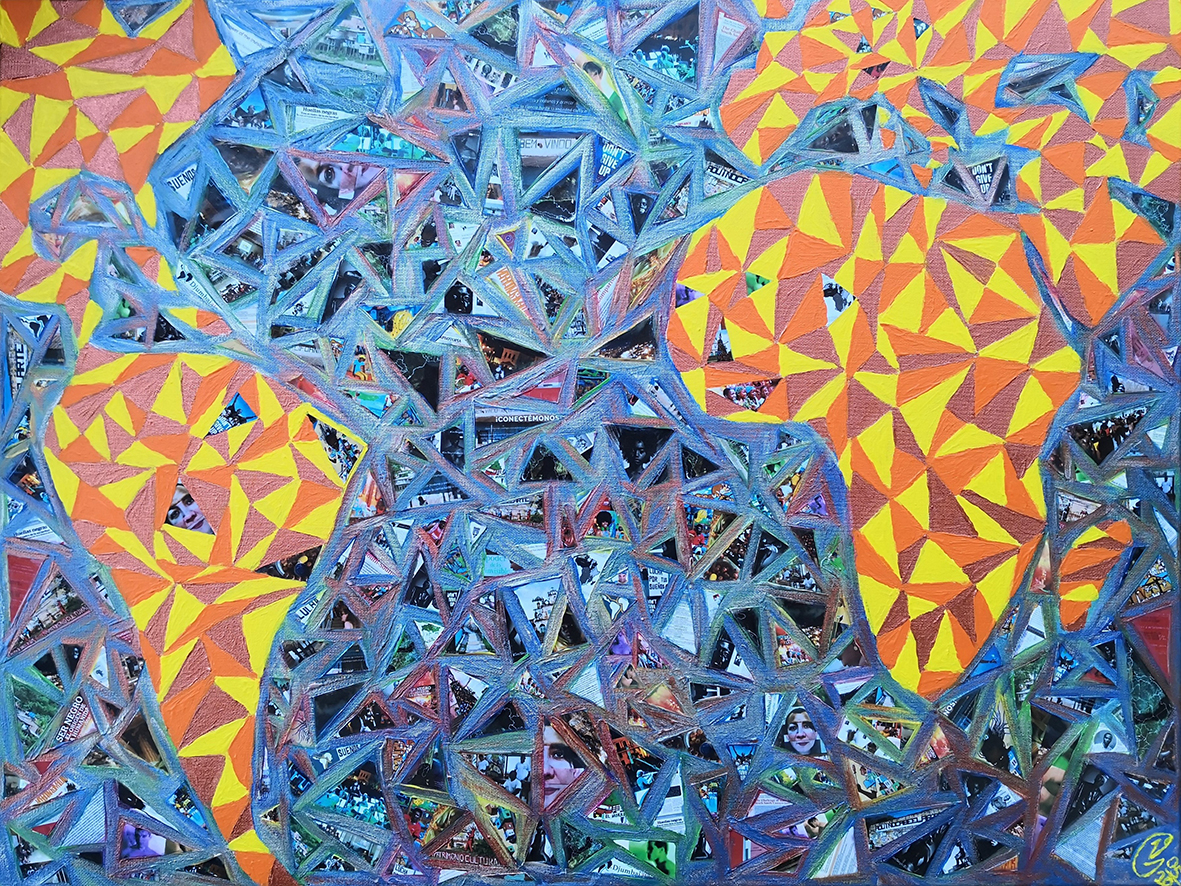 “DjumbaiALA – Contributing to Polyphonic Dialogues across the Middle Passage” by Valerie V. V. Gruber, acrylic on canvas with collage of images from the DjumbaiALA homepage, 2020

In this light, the four team members wrote the project “DjumbaiALA: Dialogues of African and Afro-diasporic Knowledges in a Multimedia Era”. They proposed to organize a one-week workshop in Salvador da Bahia (Brazil) geared towards putting DjumbaiALA’s work on a solid footing and increasing visibility, outreach and knowledge transfer in transdisciplinary research that connects Africa and Latin America. Thereby the team aims at developing long-term strategies, reliable partnerships as well as innovative tools in the field of multimedia publications and research communication.

Among a huge number of proposals, DjumbaiALA was selected as one of six finalists and Valerie Gruber was expected to represent the team in a science slam during the Brazil Day scheduled for March 2020. However, due to the outbreak of the coronavirus pandemic, the event was postponed for an indefinite period. Ultimately, the BMBF took the encouraging decision to support the projects of all six finalists. Therefore, DjumbaiALA gets the valuable opportunity to organize the proposed workshop at any time before October 2022. Hoping that the situation of Covid-19 will make it possible for DjumbaiALA’s vision to become reality, the team is looking forward to carrying out the next steps of the project.