A Congolese-German research team studied the links between conflict the Eastern Democratic Republic of Congo and the migration of Kinyarwanda speakers scrutinizing questions of land access and identity. 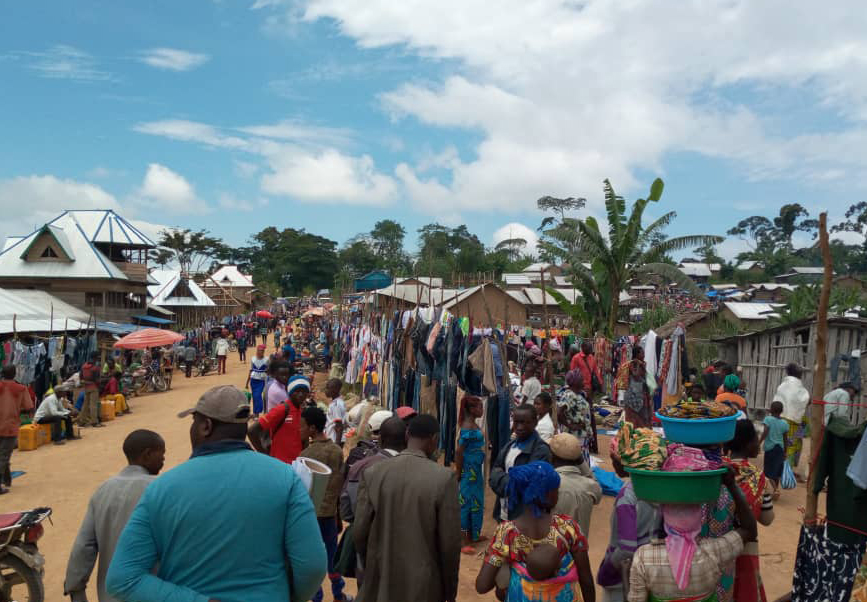 Market in a migrant settlement in Ituri (Photo: Christophe Sebudandi)

The reasons for violent conflict in the Eastern Democratic Republic of Congo are complex and constantly changing. The Cluster’s Principal Investigator Martin Doevenspeck, Professor of Political Geography at the University of Bayreuth, BIGSAS Alumni Dr. Nene Morisho, Professor for Economics at the Université Catholique de Bukavu and Dr. Aloys Tegera from the Pole Institute in Goma have just finalized a project funded by the Africa Multiple Cluster of Excellence scrutinizing links between the migration of Congolese Kinyarwanda speakers   and conflict in Ituri, Eastern DRC. The project Uhamaji wa wanyerwanda: migration and conflict in Ituri, DR Congo analysed the migration and settlement of Hutu in Ituri, as well as the rumours and stereotypes that have accompanied this movement.

Nene Morisho explains: “The massive migration of Hutu farmers from North Kuvu to Ituri has never been documented before. In examining these movements, the development of certain conflict lines became clearly visible. Our research team conceptualized the Banyarwanda movement, the migration of Kinyarwanda speakers, as a ‘travelling idea’, connecting and reconnecting various actors along its trajectory. We found that the migration results in a variety of informal institutions and assemblages, which can trigger and solve conflict alike.”

The relations between the ramifications of volunteer and forced migration of Kinyarwanda speakers in the past, and violent conflict in the Eastern Democratic Republic of Congo province of North Kivu are well known. Contentions over autochthony, identity and citizenship have mingled with ethnicized struggles for access to land and resource control in the densely populated Masisi and Kalehe districts of North Kivu. Since 2010 there is a substantial migration of Kinyarwanda speakers from these districts to Ituri where they buy land and invest in agricultural production.

The massive arrival and settlement of Hutu peasants has put the customary land management system under pressure.  For the so-called autochthonous people in Ituri land is collective property, whereas for the new arrivals land, especially that acquired by purchase and development, is private property that can be bequeathed to descendants. In this respect, there is a generational conflict in the host communities between the elders and the younger people, who strongly contest the right of customary chiefs to allocate land that is considered communal.

Whereas local Hema profit from land sale but fear the demographic weight of the Hutu with regard to political representation in the context of ethnic voting, the also immigrated Nande population claim to be firstcomers and see their monopoly of trade in agricultural products in danger. Despite the recognised contributions of the Hutus to the economic development of this region, particularly through a significant and diversified increase in agricultural production, a strong mistrust, and at times a certain hostility, is developing towards them. It is based on a persistent doubt about the identity of these Hutus called Banyabwisha, and on the fear of their growing economic importance.

Both Hema and Nande now try to cash in on existing narratives of Uhamaji wa wanyerwanda, that represent the migration of Kinyarwanda speakers in a framework that constructs a threatening ‘other’, thus perpetuating a sense of ‘otherness’. The migrants are denied to be Congolese, equated with Rwandans, and their migration linked to stories about Rwandan infiltration and destabilization strategies.

This is why Nande groups regularly block Hutu moving to Ituri and fuel recurring campaigns questioning the Congolese identity of the Banyabwisha. Among those fuelling the conflict, politicians, intellectuals and members of Nande communities living in North Kivu and Boga have been cited. A radical fringe among the fierce opponents of the Hutu settlement is demanding their return to their regions of origin, while the Hutus are in turn demanding to be treated as citizens, in search of available arable land.

Recommendations for the resolution of conflicts

“In our project documentation we make several recommendations on how to achieve peaceful cohabitation that are all based on already existing structures”, explains Martin Doevenspeck. The team concludes that a considerable number of multidimensional mechanisms at all levels, from local to national, are required to achieve the goal of conflict resolution. Each level will have to implement initiatives and measures within the framework of its competences. A conflict transformation approach is proposed that allows for a range of approaches from inter-communal resolution of land conflicts, enumeration and identification of Hutus, to the need for the Government to fully exercise its sovereign functions to impose a comprehensive peace without which many other initiatives will be compromised.

The project’s results will soon be published as part of the Cluster of Excellence’s Working Paper series.