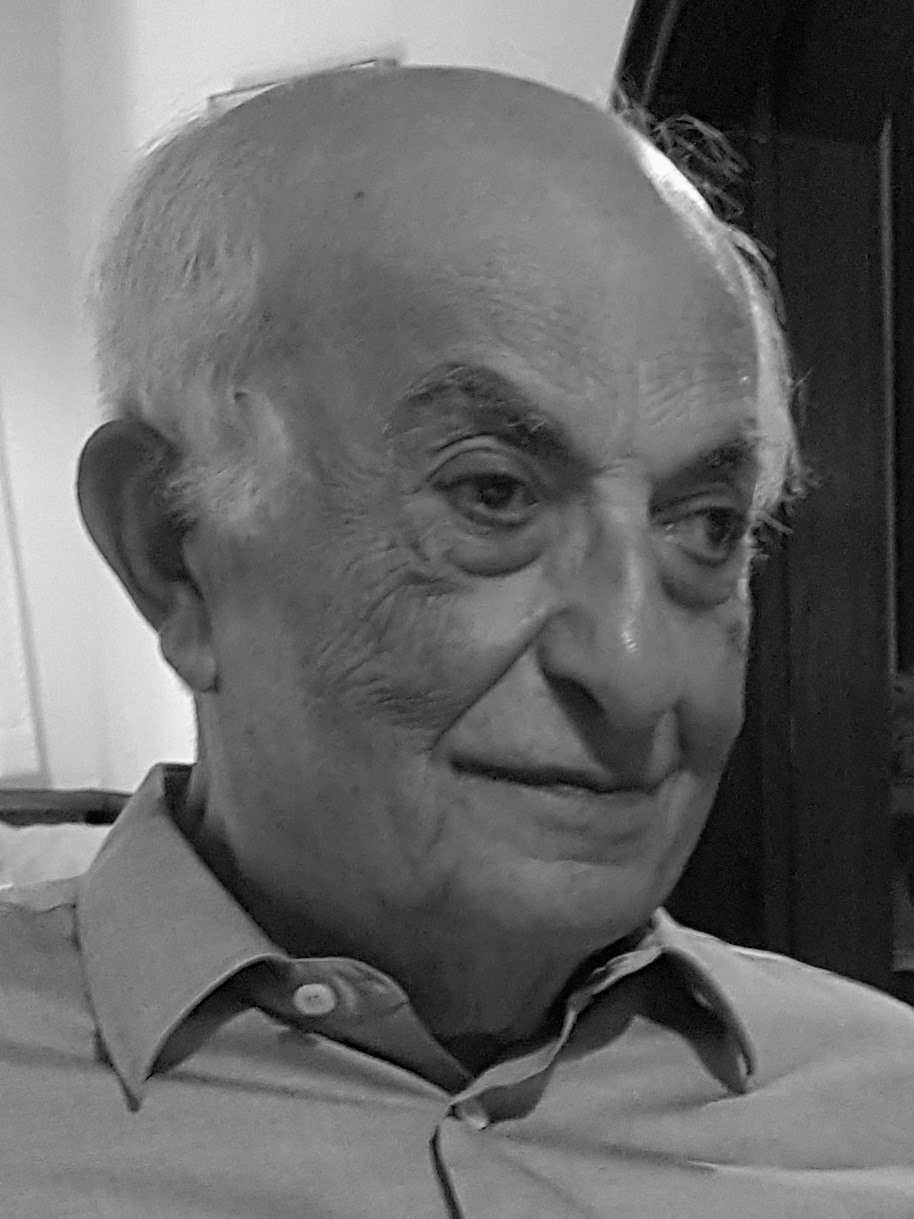 When thinking about my teacher Jamil M. (Miri) Abun-Nasr (1932-2021), a most prominent aspect of my reminiscences is that of his pipe. When Jamil started to slowly fill and to eventually also smoke his pipe, one could be sure that he was either in a mood of absolute relaxation as in the context of a cozy evening in his home in the circle of his family, in particular, his daughters Sonia and Nadia, or his colleagues such as Rick Taylor, or he was in a mood of deep thought, preparing a decision that had to be well balanced and thoroughly considered.

Thorough consideration was in fact a central trait of Jamil’s character and, connected with this trait, his willingness to forgive stupid mistakes and to grant his contemporaries (like myself) a second chance. Another, equally important trait of Jamil’s life was rigorous scientific work and argumentation. However, before presenting a more detailed picture of Jamil Abun-Nasr’s academic achievements, I would like to delve a bit into Jamil’s tragic personal life circumstances.

Jamil Abun-Nasr was born in 1932 in al-Bassa, a village of mostly Christian Palestinians in the district of Acre north of Haifa in Palestine. On 14 May 1948, al-Bassa was almost completely destroyed by Haganah-militias and its inhabitants, including Jamil Abun-Nasr’s family, were forced to flee to Lebanon.

He thus became a victim of European efforts of balancing the effects of the Nazi Holocaust of the Jews at the cost of a people that had no share in these crimes, but has to suffer from its political consequences until today.

The Israeli historian Shlomo Sand has pointed out that at the end of the Second World War neither the USA nor the European countries were prepared to open their doors to the survivors of the Holocaust. Consequently, the foundation of the state of Israel constituted for them a convenient ‘solution of the annoying Jewish problem’ they had had before the war (Shlomo Sand zitiert in Abun-Nasr 2014: 133).

I have quoted Shlomo Sand in this obituary not only in order to demonstrate Jamil Abun-Nasr’s personal entanglement with the political events of his youth – that continue to be a source of unrest until today, but also in order to give Jamil another chance to speak to “us” even after his death.

Having fled to Lebanon, Jamil Abun-Nasr’s family first settled in al-Miyya wa-Miyya near Sidon in Southern Lebanon, where Jamil was able to attend school again. In 1949 he sat for the “London Matriculation Examination” in Beirut which enabled him to teach English in al-Miyya wa-Miyya. In 1952, his family moved to Beirut, where Jamil continued his teaching activities as rector of the refugees’ school in the Shatila refugee camp which had been set up in 1949. He was thus also able to support his family financially. In 1951 he was appointed Assistant Professor for Middle Eastern History at the Beirut University College for Women, but in 1958 moved to Oxford (St. Antony’s College), where he became a student of Albert Hourani (d. 1993), a well known historian of the Middle East. Under Albert Hourani’s supervision, he conducted research on the development of the Tijaniyya Sufi order in the Maghrib and West Africa and completed his studies in 1961 with his Ph.D. in Near Eastern Studies. In 1962, Jamil Abun-Nasr was appointed Assistant Professor at the Center of Middle Eastern Studies at Harvard University, where he met H.A.R. Gibb (d. 1971), one of the leading authorities in the history of the Middle East in this period of time. In early 1963, Jamil Abun-Nasr moved on to the University of Ghana, where he was to meet, as colleagues in the field of Middle Eastern and African history, Nehemia Levtzion (d. 2003) as well as Ernest Gellner (d. 1995), who were to remain livelong friends. In late 1963 Jamil Abun-Nasr returned to Lebanon, where he taught Middle Eastern History at the American University Beirut. Further teaching positions followed at Fourah Bay College in Free Town/Sierra Leone (1966-1967) and at the University of Ibadan in Nigeria (1968-1974). His time in Ibadan turned out to be one the happiest in Jamil’s life due to the fact that he was able to form friendships with academic colleagues such as J.F.A. Ajayi (d. 2014), but also due to the fact that the University of Ibadan at that time was one of the leading centres for the development of post-colonial history and a most important intellectual centre of independent Nigeria.

In September 1974, Jamil Abun-Nasr came to Berlin, first as an Alexander von Humboldt research fellow, then on a Volkswagen grant and was able to meet, in this period of time, two well known German historians and scholars of the Middle East, namely, Fritz Steppat (2006) and Baber Johansen. In September 1980, he was eventually invited to teach “Islamwissenschaft” at the emerging University of Bayreuth and asked to set up a teaching programme for this discipline – that was originally thought to form part of a department of “Evangelische Theologie”. In 1985, an independent C4 professorial position for “Islamwissenschaft” (with a focus on Muslim societies in Africa) was established at the University of Bayreuth (in the Faculty of Languages and Literature) and Jamil Abun-Nasr, after having gone through the process of application, was finally appointed to this position. From his “Ruf” in 1985 to his retirement in 1997, built the first and so far only chair in Islamwissenschaft with a regional focus on Muslim societies in Africa in Germany. At the same time, Jamil Abun-Nasr belonged to the generation of pioneers who built, since the early 1980s, the research focus on sub-Saharan Africa at the University of Bayreuth. Most prominently, Jamil Abun-Nasr directed a series of research projects (1984-1996) in the context of the Bayreuth based DFG-project “Identity in Africa”. In the context of this research, focusing on Nigeria initially, but then expanding to other African countries such as Senegal and Mali, Egypt and Morocco, Jamil Abun-Nasr worked hard and successfully to establish the “Materialsammlung Islam in Africa” that not only served as an archive and documentary centre for his own research as well as his research team, but also a basis for the research activities of colleagues from all over the world.

Due to his education at Oxford as well as his various teaching positions at AUB, in the USA, in Ghana, Sierra Leone, Nigeria as well as finally in Germany, as well as due to his research activities in the Maghrib as well as in West Africa, Jamil Abun-Nasr not only became a “citizen of the world” (a “Weltbürger”), he was also able to cultivate numerous links and friendships with colleagues from the countries mentioned above and to expand his links to colleagues and friends such as, for instance, Fatima Harrak and Mohamed Mansour in Rabat, Mohamed Hédi Chérif (d. 2021) in Tunis, Butrus Abu Manneh (d. 2018) in Haifa, Louis Brenner in London, Ruud Peters in Amsterdam or John Hunwick (d. 2015) at Northwestern University in Evanston. His personal fate and the tragedy of Palestine did not deter him from cultivating academic links with Jewish colleagues both in and beyond Israel. Despite his tragic personal fate, Jamil Abun-Nasr’s academic work was not impaired thus by resentment, but always open to inspiration and informed by the thorough analysis of data, texts and social as well as political contexts. In fact, he demanded both of his students as well as his research team members and academic staff (Stefan Reichmuth, Anke Bossaller, Franz Kogelmann, Gottfried Müller, Carsten Hock, Ralf Elger, Renate Cedzich as well as myself) that research had to be based on linguistic competence, a broad knowledge of sources and thorough field work. Theoretical considerations should be based on sound empirical foundations. This demand was also expressed in Jamil Abun-Nasr’s texts, most particularly in his „History of the Maghrib in the Islamic Period“, which has become, since the 1980s, a work of reference for North African history as well as the socio-political development of the region. This statement equally applies to his latest monograph, “Muslim Communities of Grace - The Sufi Brotherhoods in Islamic Religious Life” (2007). Both his research as well as his publications reflect Jamil Abun-Nasr’s academic socialization in a pragmatic British scientific tradition that shunned theoretical speculation. At the same time, this approach to science as well as the regional focus on sub-Saharan Africa – an under-researched field in German Islamic studies until almost today – turned Jamil Abun-Nasr into an “outsider” as well as a pioneer in German Islamic studies that were characterized, at least until the 1980s, by a strong focus on philological work, the translation and analysis of texts. Today, German Islamic studies have not only become more empirical, they have also opened towards research in regions of the “Islamic world” that have formerly been regarded as being “marginal”. Jamil Abun-Nasr has contributed substantially to this epistemic turn.