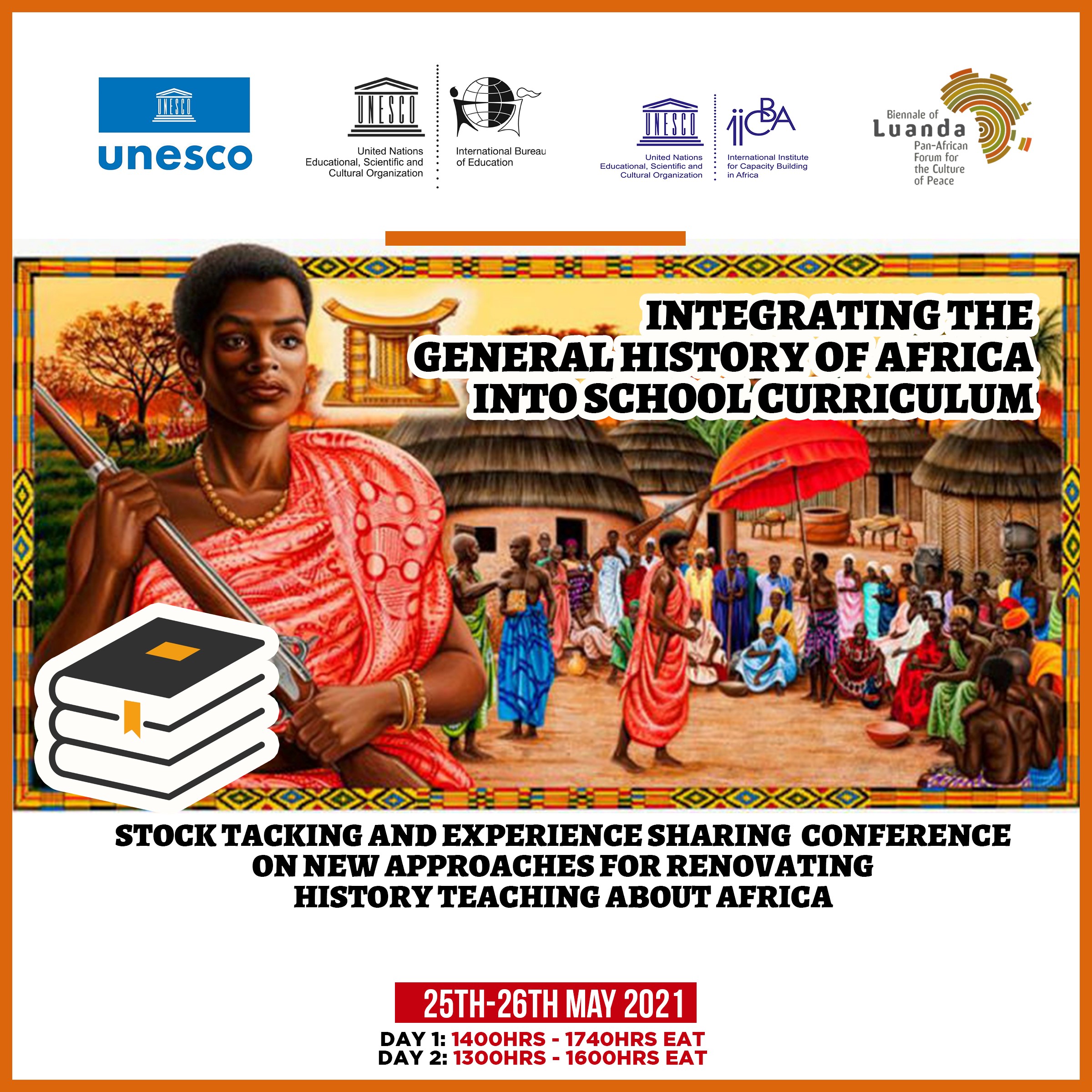 In 1964, UNESCO launched Phase I of the monumental works of the General History of Africa (GHA), in support of the then newly independent African countries’ willingness to take back ownership over the narration of highlight of their history, and re-affirmation of their cultural identities to reinforce the common aspiration to achieve African unity.

Phase I was concluded in 1999 with the release of 8 Volumes of the GHA, product of a pioneering scientific and intellectual endeavor that has mobilized more than 230 historians over 35 years and that covers the history of the entire African continent, from the appearance of mankind to the contemporary challenges facing Africans and their Diasporas in the world.

Despite this great achievement, several studies and surveys undertaken by UNESCO showed that the volumes of the GHA remained inaccessible to the public at large and that it was neither widely disseminated nor sufficiently used in schools and universities. Besides, the move of some curricula developers in some countries towards the “nationalization” of history, overlooking the common roots and interactions of the different African cultures and civilizations, brought to the front additional challenges to which urgent remedial actions were needed, including the promotion of history teaching from a Pan-African perspective in basic and higher education.

Key Steps to Leverage on

In 2009, Phase II of the GHA Project was activated. It aims at using the contents of the volumes produced to develop pedagogical materials for both formal and non-formal education, as well as the elaboration of additional Volumes of the collection.

This new Phase of the GHA Project underpins resolutions adopted by UNESCO General Conference at its 34th (2007, 34C/Res. 39) and 35th (2009, 35C/Res. 40) sessions. It also responds to the AU Member States’ requests for UNESCO’s technical assistance for developing common educational contents, including textbooks, teachers’ guides, and accompanying material based on the GHA. The Charter for African Cultural Renaissance adopted by AU Summit in Khartoum in 2006, which uphold that “the unity of the Continent is founded first and foremost on its history” and further stresses the “need for the reconstruction of the historical memory and conscience of Africa and the African Diaspora”, and which recognizes that, “The General History published by UNESCO constitutes a valid base for teaching the history of Africa” add to background of Phase II. More so, Agenda 2063, The Africa We Want, recommends that the ideals of Pan-Africanism and African renaissance in school curricula.

Besides, the main political decisions adopted by the African Union (AU) bodies, between 2009 and 2018, commended UNESCO’s initiative and urged AU Member States to contribute to the implementation of the project and to integrate the common pedagogic materials developed based on the GHA, once available.

In addition, the Africa Union theme for 2021, “Arts, Culture and Heritage: Levers for the Edification of the Africa We Want” is appealing as a suitable framework for reaffirming the importance of history in the building of the Africa We Want. This perspective was further echoed by His Excellency Felix Tshisekedi, in his Acceptance Speech for the Presidency of the Africa Union in February 2021, when he referred to the Pan Africanist Patrice Emery Lumumba’s firm belief of the great destiny of Africa, and quoted his declaration as follows: "Africa will write its own history. And it will be north and south of the Sahara a history of glory and dignity. "

Building on the above, UNESCO’s perused with commitment a holistic approach in the development of pedagogical materials for primary and secondary schools, for each age of the 3 targeted age groups (10-12, 13-16, 17-19), including curriculum outlines, basis for the development of teachers’ guide and textbooks. Indeed, this process was supported by experts, designated focal points from African Ministries of Education, and guided by an International Scientific Committee composed of Historians, curriculum developers, pedagogues, linguists, sociologists, peer-reviewers from all over the continent.

The pedagogical material developed received AU’s Ministers of Education, Science and Technology political validation, during their meeting held in Cairo (Egypt), in October 2017. The Executive Council of the African Union (Foreign Ministers) endorsed this decision during its meeting held in January 2018 in Addis Ababa, Ethiopia, alongside the Summit of AU Heads of State and Government.

Several African and non-African Memer States have already expressed their interest to integrate these contents of the GHA into their national curricula, including, but not limited to Botswana, Egypt, Ethiopia, Ghana, Kenya, Liberia, Mauritania, Senegal, Sierra Leone, South Africa, Sudan, Tanzania, Uganda and Zimbabwe. France is the first non-African country that has expressed the same interest.

At a sub-regional level, the SADC Secretariat has been mandated by the Joint meeting of Ministers of Education and Science, Technology and Innovation, held in June 2018 in Durban (South Africa), to “ensure that all the Southern African Schools have Southern African Liberation history as part of their curricula”, and to facilitate “Member States who have already included Liberation History in their School Curriculum to share experiences with each other.”1 It is within this framework that UNESCO has developed its National Liberation Movement Heritage Programme in the Southern Africa region, to support SADC Secretariat implement this decision in the formal education system (mapping of curricula and roadmap), while also disseminating the historical knowledge to youth in non-formal education setting.2 Such an endeavor also aims at promoting the sense of regional solidarity and integration in the face of the xenophobic waves that occurred in the sub-region.

Objectives of the Conference

This Conference is proposed with the main objective to promote the integration of the pedagogical materials into national curricula and to share Kenyan experience in this process, while taking stock of other relevant initiatives in the region and beyond.

From this conference, it is expected that:

This Conference will be organized from 25 to 26 May 2021, as a contribution to the Africa Week Celebration by UNESCO and the observance of the Africa Day (25 May). It is also inscribed as an event paving the way towards the Luanda Biennale for a Culture of Peace (4-8 October 2021), while bringing substantive insights to both the objectives of the International Decade for the Rapprochement of Cultures (2013-2022) as well as the International Decade for People of African Descent (2015-2024).

The Conference will be held on a virtual format, to integrate the constraints still persisting due to the COVID-19 Pandemic, and will have a simultaneous translation available in English and French. Interactive sessions will be planned to address specific sub-themes to show-case relevant approaches towards the integration of the GHA, both for formal and non-formal setting.

In this regard, Day 1 will feature the opening ceremony, followed by Session 1 that will start up with a discussion on some challenges and opportunities for the integration of the GHA into national curriculum of given countries, assessed from their particular experiences and contexts. Session 2 will highlight the pioneer step taken by Kenya for the integration of the GHA Volumes and pedagogical materials in all levels of education, including at diploma teacher training, through the Competency Based Curriculum and ongoing curriculum reform. The session will bring on board key national actors involved in this process, for the sharing of success factors as well as challenges faced.

Day 1 will be concluded with Session 3 that will shed more light on the development of knowledge and resources on the African National Heritage Liberation Movement as a means to enhance better mutual understanding, peaceful coexistence and also as a means to fight against discrimination and xenophobia, based on the experience of Southern Africa Countries. Strategies put in place by the Southern African Development Community (SADC) with the support of UNESCO will be further elaborated in this regard, including in relation with Global Citizenship Education. The work underway in Tanzania will also be reflected in this discussion that will put in perspective the important part that the Africa National Liberation Movement play in the General History of Africa.

In Day 2, Session 4 will discuss some new approaches for the promotion of national history as well as the GHA in some countries, including through the development of documentaries and other animated resources, with examples from Senegal and Cote d’Ivoire for instance. The relevance of interactive teaching methodologies, such as visit to a Museum, or historical site to promote history teaching will also be discussed. The importance of historical archives and the struggle for their conservation will also be presented as an opportunity, including through numeration. And the relevance of the UNESCO Memory of the World Programme will be considered in this regard, while showcasing ongoing efforts in selected countries.

Under Session 5, discussion will bring more insight on the integration of the GHA at the tertiary education level, through engagement with experts and representatives from specialized institutions; Departments of History, African Studies Institutes, but also the Pan African University. This session will also bring in the perspective from the diaspora, for instance through the Africa America Institute.

Lastly, a Session with place a special focus on formulation of recommendations and ways forward for the integration of the GHA in school curriculum and the promotion of its teaching and learning in Africa and beyond.