The workshop Fielding the Field was organized by the Cluster’s Vice Dean of Research Prof. Dr. Erdmute Alber, Prof. Dr. Iris Clemens (both University of Bayreuth) & Pamila Gupta (University of Witwatersrand). It was conducted online on 21 May, 2021.

A shared interest in the field as a fundamental aspect of social scientific research inspired  Erdmute Alber (Social Anthropology, Africa Multiple Cluster of Excellence, University of Bayreuth), Iris Clemens (General Pedagogy, Africa Multiple Cluster of Excellence, University of Bayreuth) and Pamila Gupta (Sociocultural Anthropology, Wits Institute for Social and Economic Research/University of Witwatersrand) to organize a digital workshop titled “Fielding the Field” which took place at University of Bayreuth on May 21, 2021. The convenors think of the field as an “open assembly” of items ranging from questions, assumptions, previous knowledges, and prejudices to emotions, materialites, time regimes, human and non-human interactions. Reflecting on the process of constructing a field thereby points to various ontological and epistemological questions of social scientific research in a broader sense. Theoretically, practices of distinction (e.g. between entities, sequences, processes), observation, and description that occur in the frame of relational encounters between researchers, research participants, and observed entities were of central interest. 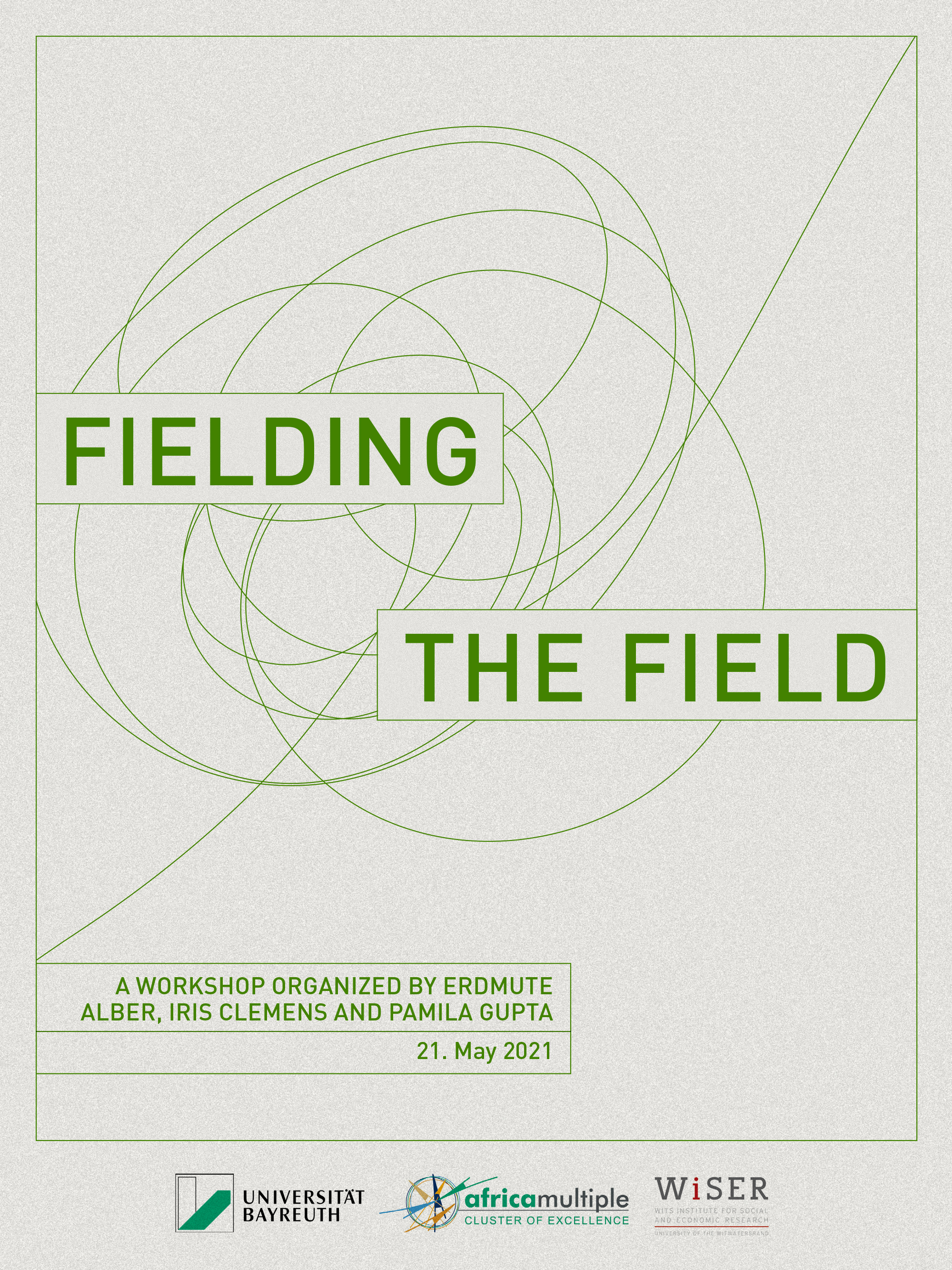 The poster announcing the workshop

In the first panel “Fielding assemblages and connectivity,” chaired by Iris Clemens, the focus was on processes of constructing, (re-)defining and (de-)bordering the field – in general, as well as specifically during a global pandemic.

Vandana Vyas (Heidelberg University/Jawaharlal Nehru University) – who researches lifelong learning and ‘active ageing’ amongst educated seniors in Baden Württemberg – spoke about the challenges of doing ethnographic research with a population deemed especially vulnerable under the influence of the ongoing COVID-19 pandemic. Experiencing the shift from face-to-face to digital research while in the field, and grappling with a frequently changing public health regime, Vyas analyzed how the public and medial framing of her informants contributed to their stigmatization in terms of ageism.

Michael Bollig (University of Cologne) engaged with the assemblage approach and its potential in relation to studying multispecies entanglements – especially useful in the field of environmental anthropology. Bollig presented assemblage as a theoretical angle that may allow researchers to overcome anthropocentric and nature-culture-binary models in approaching fields that are characterized by multispecies encounters, such as a planned project on elephant conservation.

Eileen Jahn’s (University of Bayreuth) research focuses on the politics of access to the electricity infrastructure in South Africa. Working with undersupplied and precariously connected electricity users, Jahn reflected on how colonial and class distinctions mobilized in the public discourse around electricity use and illicit practices of research participants – such as non-payment or self-connection – informs the construction of the field in their work in the quest for a non-hegemonic framing of the struggle around electricity in post-apartheid South Africa.

Paolo Gaibazzi (University of Bayreuth) approached the topic of the field from a position of interest in its boundaries. Gaibazzi’s experiences in researching Ganbana, a West African (diasporan) anti-slavery movement, under pandemic conditions brought up the need to de- and re-border the field at various points in the research process, resulting in a redefined understanding of the field more broadly. The paper focused on the collaboration with Gambian research assistant Alagie BK Sillah, which did not only bring up practical and ethical questions, but led to a debordering of their respective positions though various (online and offline) modes of cooperation.

In the frame of the second panel “Fielding as algorythming and writing,” moderated by Pamila Gupta, presenters dove more deeply into how particular configurations (such as the increasing datafication of anthropological research) and reflections (such as taking readers of ethnographies centrally into account) inform the field construction process.

Penelope Papailias (University of Thessaly) spoke about the ascent of digital ethnography during the pandemic and how this led to a re-conceptualization of the field, researchers and research participants in anthropology. Rather than problematizing the sudden shift to digital research methods, Papailias innovatively wondered what was missing in anthropological conceptions of the field before this shift. In their paper, they focused on the implications of the “datalogical turn”, new forms of temporality that result from algorithmic memory, “lifelogging”, and the continuous networking of the present.

Drawing on the concept of reader-response criticism from the context of literary theory, Julia Pauli (Hamburg University) encouraged anthropologists to factor in the reader of ethnographic texts into their work and their approaches and wondered how definitions of the field are altered when anthropologists ask themselves the question “Who is my audience?”

Susan Levine (University of Cape Town), speaking from the perspective of a medical anthropologist, reflected on the fragmentation of the field that comes with the self-isolation necessitated by the COVID-19 pandemic, and social distancing measures impinging upon the ‘being there’ that lies at the root of anthropological research. Comparing the current “puzzle work” of gathering data through watching news, browsing social media, and interacting solely digitally with the very visible, activist, immersive and interpersonal engagement of anthropologists at the peak of the HIV/AIDS pandemic in South Africa, Levine directly relates to Günel and Watanbe’s concept of “patchwork ethnography” (see below).

The presentations in the final panel on “Fielding the self,” chaired by Erdmute Alber, explored the various ways in which a researcher’s own self, e.g. in the form of their (gendered) bodies or their disciplinary embeddedness, informs their encounters and relationships with others in and outside of the field and thereby shape research, work and themselves.

Joh Sarre (University of Bayreuth) reflected on their PhD fieldwork in Kibera, Nairobi and how seeming trivialities such as clothing choices influenced relationships in the field. Sarre’s clothed self and body – read as female by research participants – invited multiple interpretations about identity as well as opportunities for others to construct their belonging (e.g. in getting dressed up by interlocutors in hyper-feminine ways for weddings). Sarre thus came to understand fieldwork as encompassing multiple forms of meaningful ‘impression management’ in daily human encounters that may be interpreted as everyday negotiations of (dis)belonging, difference, and sameness.

Valerie Gruber (University of Bayreuth) spoke about the constitution of the research field in processes of transdisciplinary knowledge co-production as experienced in their PhD research with Afro-Brazilian- and Afro-Colombian arts groups. The opportunities (and challenges) of collaborative knowledge production within a network of researchers, artists, and activists – further reinforced by social distancing and research from afar, but also imbued with new opportunities), formed a pillar of Gruber’s research. Here, the field emerged as a fluid space within this cooperation and its multiple relationalities.

Paddy Kinyera (University of Bayreuth) joined the conversation from Uganda. Inadvertently shining a light on issues of digital co-operation – such as global inequalities in access to reliable internet connections – their connection failed, and allowed only for a partial delivery of the paper. Centering on an encounter during fieldwork in which the boundaries between the researcher and research participants were unsettled, Kinyera argued for a clearly reflexive and relational stance of researchers, urging the need to perceive of the production of knowledge as situated in multiple field relations and (inter)actions.

Chika Watanabe (University of Manchester, also representing their co-collaborator Gökçe Günel, University of Rice) held a presentation on the much-debated concept of “patchwork ethnography,” which was developed before the pandemic, but turned out to be all the more relevant because of it. Having some crossovers with Levine’s idea of the field as “puzzle work,” Watanabe highlighted how ethnographers’ own lives and multiple professional and personal commitments, e.g. as care-givers in their families or as employees in precarious academic work settings, are shaping the field. The aim of their concept is to academically fructify the fact that these multiple commitments make fieldwork more and more patchy rather than perceiving of them solely as limitations or constraints.

The various contributions and engaging discussions following the presentations point to a high relevance of the seemingly classical topic of the field in social scientific discourse. Most of the presenters identified relationality and ‘encounter’ as central to the exercise of field research, which directly relates back to the issue of the construction of the field. Some of the contributors explicitly reflected on challenges, and also on new opportunities brought forth by the ongoing COVID-19 pandemic, and thus gave glimpses into the future of debates around the field. It became clear that new foci in academic discourse and global conditions informing research directly relate to questions of (de-/re-)constructing the field, rendering the field a central topic for the reconfiguration of social scientific debates.

Fielding as Algorythming and Writing