After issuing the open call for photographic contributions, the Cluster of Excellence received numerous submissions. Twelve images were carefully selected and are now part of the 2022 Cluster calendar that impressively shows the creativity and diversity of ideas of the call's entrants.
​

In September 2021, the Africa Multiple Cluster of Excellence invited all amateur and professional photographers to participate in a call for photographic contributions on the topic of "African Icons". The idea was to create a portfolio of ideas of what an African Icon could constitute bearing in mind that an "icon" can be many things among others a person, a symbol, a statue or a building. Fully aware that 'Africa' as a continent is a vast and heterogenous entity the organisers at the Africa Multiple Cluster of Excellence were impressed by the range of submissions and are happy with the end result of their calendar that will be sent out to partners and affiliates of the Cluster at the end of the year.

The photographers and their submissions (in alphabetical order) 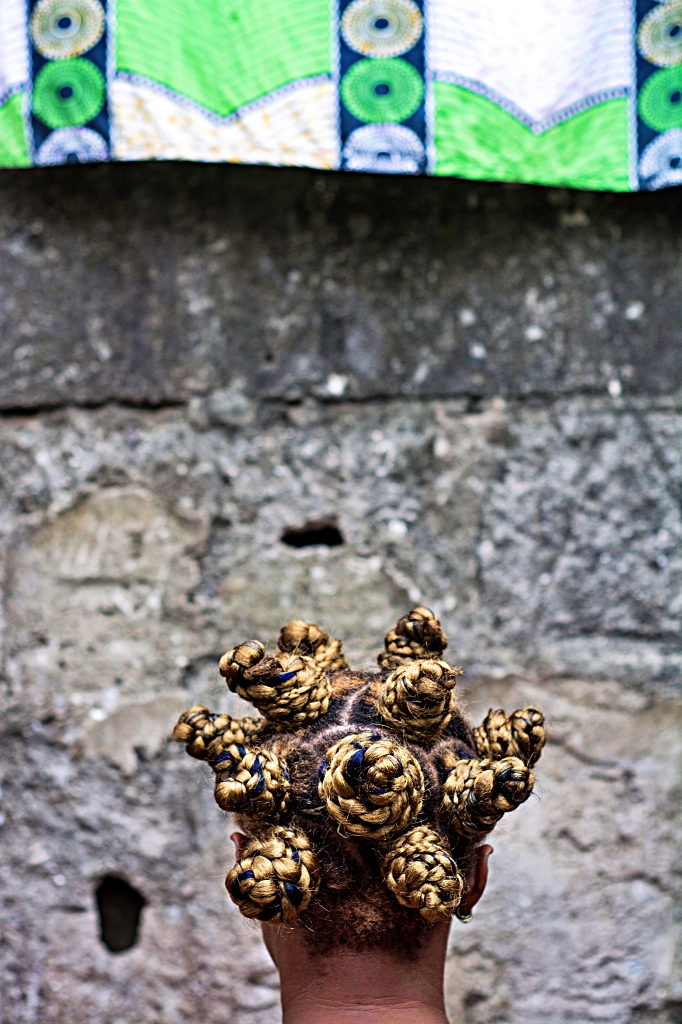 He explained: "The title of the series is 'Hairllo'. In the series, I was looking at the new trend in the urban female hairstyles. Sometime it is simple and sometime it is complex. And the complexity of the hairstyle might be in its architecture, while the simplicity might be in its colour.
Actually, I am fascinated by the new trend because growing up in the 1990s, the hairstyles were simple and attractive. As a male child, I know some names like Kòlápá, Kòlẹ́sẹ̀, Korobá, Òrìṣà Bùnmi, Pàtẹ́wọ́ and some on. The names of the styles were as interesting as the style structures. Then, women spend little on making beautiful hairstyles, today, the story is not the same." 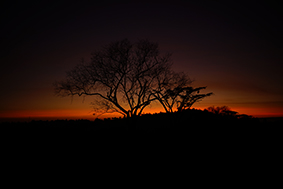 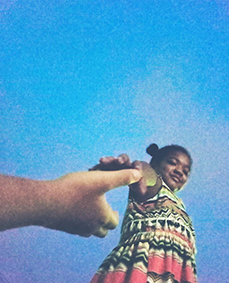 As part of his inspiring submission for the photographic call Elangwe Bob Blaise wrote: "This photo was taken by my kids and represents the urgent necessity of humans to always be in a position to provide help or assistance to each other that are desperately in need of it." 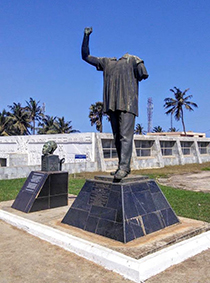 The image submitted by R. Benedito Ferrão shows the vandalized statue of Ghanaian politician, political theorist, and revolutionary Kwame Nkrumah, who was the first Prime Minister and President of Ghana. For the photographer an "African icon" because "the statue still strides unvanquished at his mausoleum in Accra, Ghana." The photo was taken in September 2015. 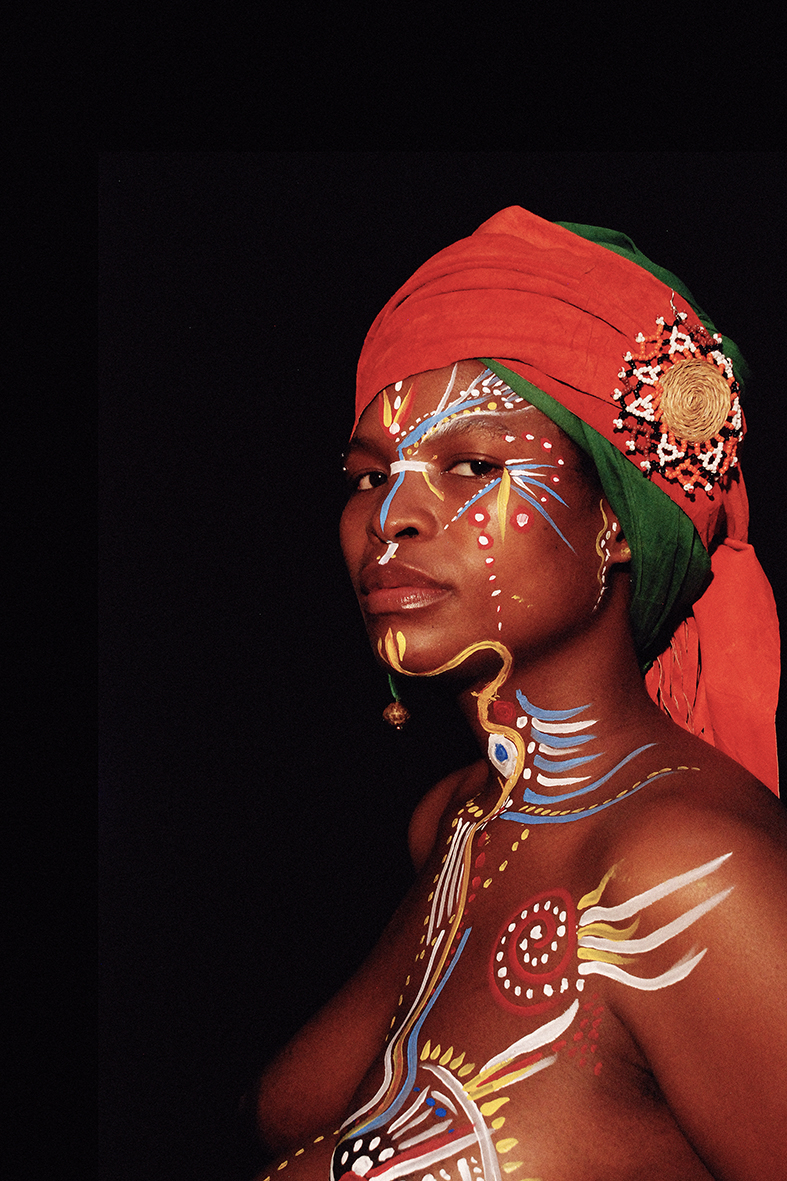 Adiodato Gomes "The light and the song of the birds"

The picture that was taken in 2012 was part of an exhibition that presented a series of images by photographer Adiodato Gomes in 2016.

In the series entitled "Luvano", the photographer portrayed a pregnant woman. The photographs express his appreciation for the female body showcasing the dichotomy of both female power and softness accentuated  by the art of body painting.
(Model: Thobile Mcincinini) 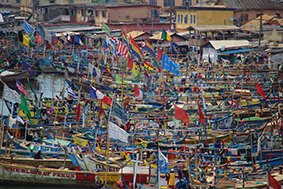 The colourful picture that was taken in 2016 shows a fleet of fishing boats in Elmina, Ghana.

Gerald Heusing explains: "85 percent of Ghana's fish catch is imported into the European Union. But many Ghanaian fishing fleets fish illegally, stocks are overfished. The government there and the European Union could do more against illegal practices in the fishing industry – but its structures are opaque and complex. The industrial fishing fleets belong to Chinese owners who hide behind Ghanaian front companies – say the traditional artisanal fishermen in Elmina." 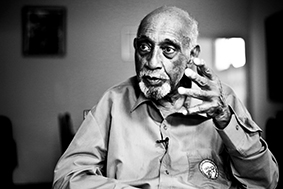 Marcelino dos Santos was a Mozambican poet, revolutionary, and politician. As a young man he travelled to Portugal, and France for an education. He was a founding member of the FRELIMO (Frente de Libertação de Moçambique), in 1962, and served as the party's deputy president from 1969 to 1977.

Photographer John Lino de Melo from Goa, India, took this photo of Marcelino dos Santos – his idea of an African icon – in Maputo, Mozambique in 2014. 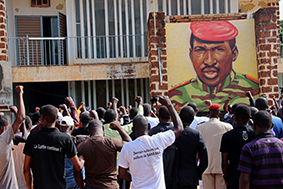 Harouna Marané, an artist-photographer from Burkina Faso, submitted this picture of a grop of men chanting to a depiction of Thomas Sankara. Thomas Isidore Noël Sankara who was murdered in October 1987 was a military officer, a revolutionary, and President of Burkina Faso. He is viewed by supporters as a charismatic and iconic figure of revolution often times being referred to as "Africa's Che Guevara". 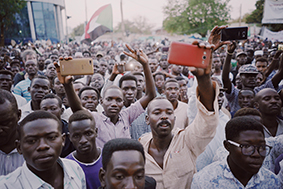 Muhammad Salah is the only photographer that is represented twice in the 2022 Cluster calendar. One of the images that were chosen depicts protesters listening to a speech at a sit-in in Khartoum, the Sudanese capital. The image was taken in April 2019. 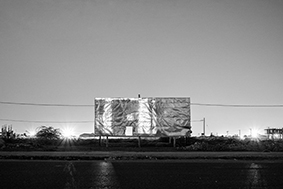 Muhammad Salah "The city as a (host)-pital-ity"

When submitting the image taken in Khartoum in October 2020, the photographer wrote: "The city as a (host)-pital-ity, the city as a medium which accomdates and absorbs movement and time." 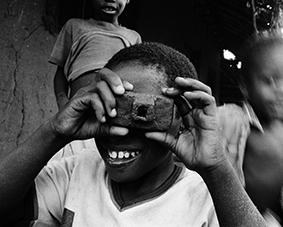 Mozambican photographer Sérgio Santimano, who was a guest at the Cluster of Excellence in November 2021, also contributed to the "African Icons" calendar project. His picture "Auto retrato" (Eng: Self-portrait) is one of his favorite motifs, because to him it expresses an unwavering positivity and joy of life.

The picture was taken in Pemba-Cabo Delgado, Mozambique, in 1997

In this image, Nuno Silas explores the relationship between digital art, identity, and global information networks about images of Africa available on the internet.

The selected images that compose the artwork represent signs or symbols of Africa's countries.

Nuno Silas seeks to construct by pixelating and layering the images to propose an idea of Africa or icon by creating an artistic message, a sort of personal reality about Africa.

The artwork also comments on the importance of African icons, especially after the African liberation struggle to African culture. Indeed the piece emerges as a visual reflective of African figures; that perpetuate in our time in the post-colonial and decolonial time.