On Saturday, 13 November 2021, Prof. Dr. Ute Fendler and Prof. Dr. Clarissa Vierke invited the interested public to an exciting and eventful themed day dedicated to the Indian Ocean. Music, films, dance, photographs and poetry transported the audience to the regions hugging the shores on both sides of the Indian Ocean.

Ever since the Tanzanian Abdulrazak Gurnah won the Nobel Prize for Literature, the African region on the Indian Ocean has been on everyone's lips. However, the researchers of the Cluster of Excellence have been working on issues of this region for several years already. Reason enough to organise a series of events focusing on this very topic. In addition to the 2021 film festival "Cinema Africa" that took place in the middle of November, Ute Fendler and Clarissa Vierke also invited the interested public to a whole day experiencing the various forms of art and expression of the region and following the discussions around that specific topic.

The audience that had gathered on Saturday, 13 September 2021 in the tradition-steeped Reichshof cultural venue in Bayreuth to attend the themed day “Intermedial Indian Ocean” was in for a treat. What the organisers had come up with for the day was a varied and entertaining programme that had a lot to offer, from music to film and photography to dance and performance. The artists and scholars who had especially come for this event all arrived from the Indian Ocean region (Goa, Kenya, Mauritius, Mozambique, Zanzibar and Tanzania) and provided international flair in Bayreuth's otherwise often tranquil ambience. 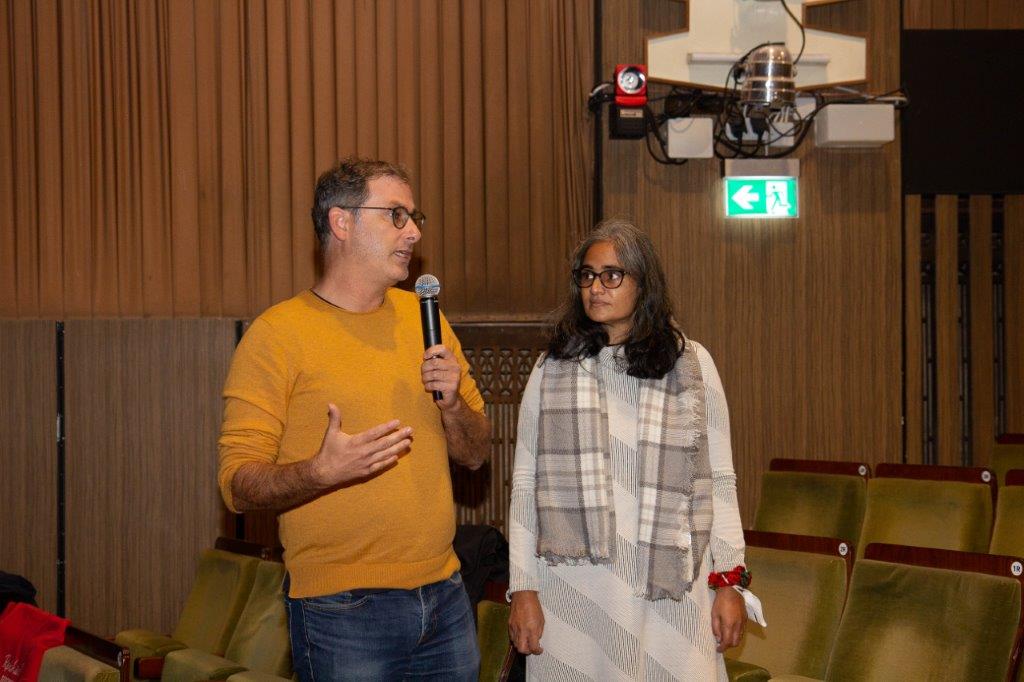 Starting off the first item on the agenda was the screening of a documentary by filmmaker Nalini Elvino De Sousa and anthropologist Pedro Pombo. "The Club" portrays the life of Goans in Tanzania and the cultural club that united them. The film team followed families recounting their memories of the club in Dar es Salaam, from the traditions that were maintained there to the music they listened to together. After the presentation, Nalini de Sousa and Pedro Pombo talked together with Duncan Tarrant about their motivation to make the film as well as the intricate process that was involved. 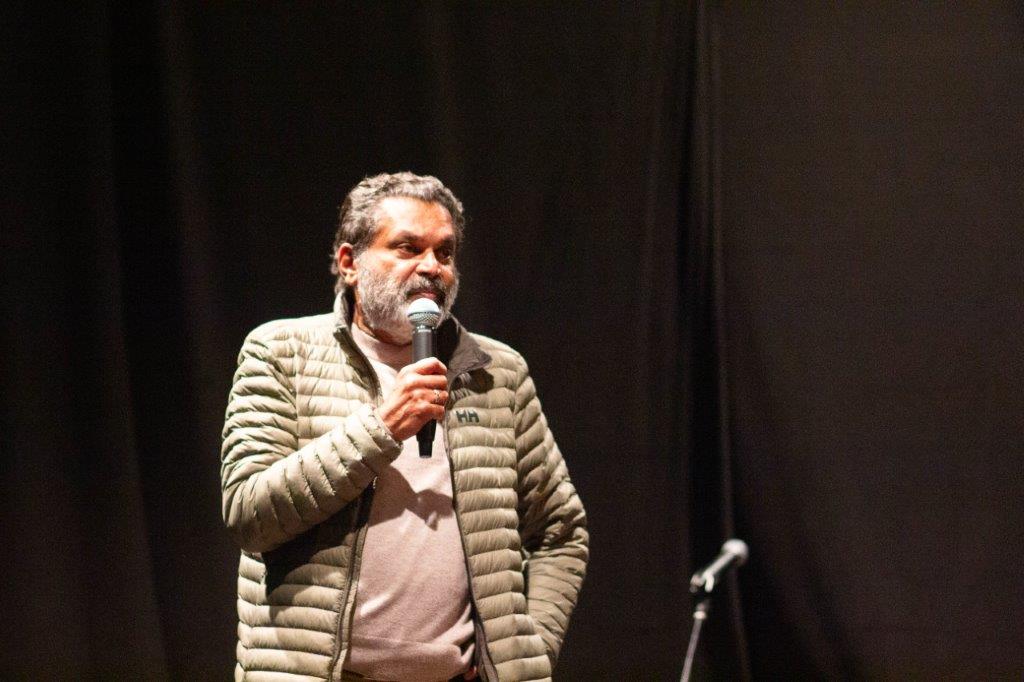 Mozambican photographer Sérgio Santimano subsequently took the stage talking about his latest series of photographs entitled “Goa/Mozambique – Crossed Glances”. The photographer born in Mozambique and of Goan origin showed images taken in Goa and in the northern provinces of Mozambique (Nacala, Niassa, Cabo Delgado and the Island of Mozambique) that recount the memories of families living on both sides of the Indian Ocean. Santimano gave insights into his personal biography and creative process and also explained that there are very strong connections between Goa (India) and Mozambique with continuous migratory movements between the two regions. Sergio Santimano’s works that were displayed during the talk gave an insight into the crossed glances across the Indian Ocean thus explaining the subtitle of his series: “Olhares Cruzados/Crossed Glances”. 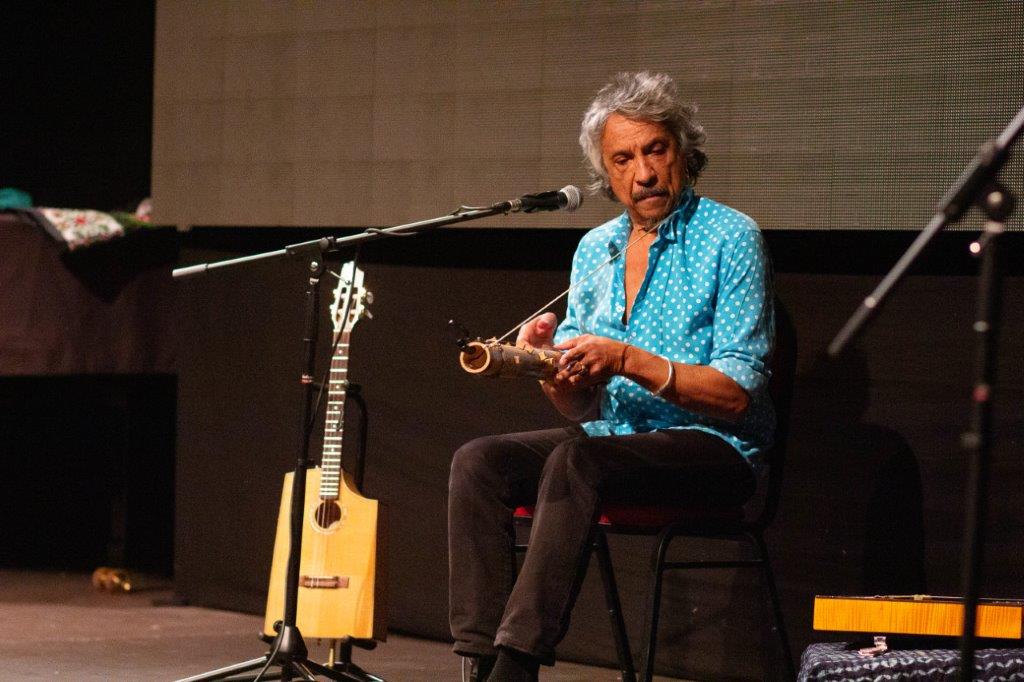 Next on stage was Tao Ravao sharing sound waves from the Indian Ocean on his kabosy that captivated the audience. Born in Madagascar, Ravao had always been fascinated by the music of the big island and the multi-instrumentalist took up playing the kabosy in the 1980s which took him around the world (Canada, the United States, Japan, East Africa). His love for Malagasy music led Tao Ravao to become the artistic director and producer of albums by the great D'Gary and Jean Emilien, Senge and Rajery. He has also produced the albums of Ba Cissoko and Sékou Diabaté of Bembeya Jazz. 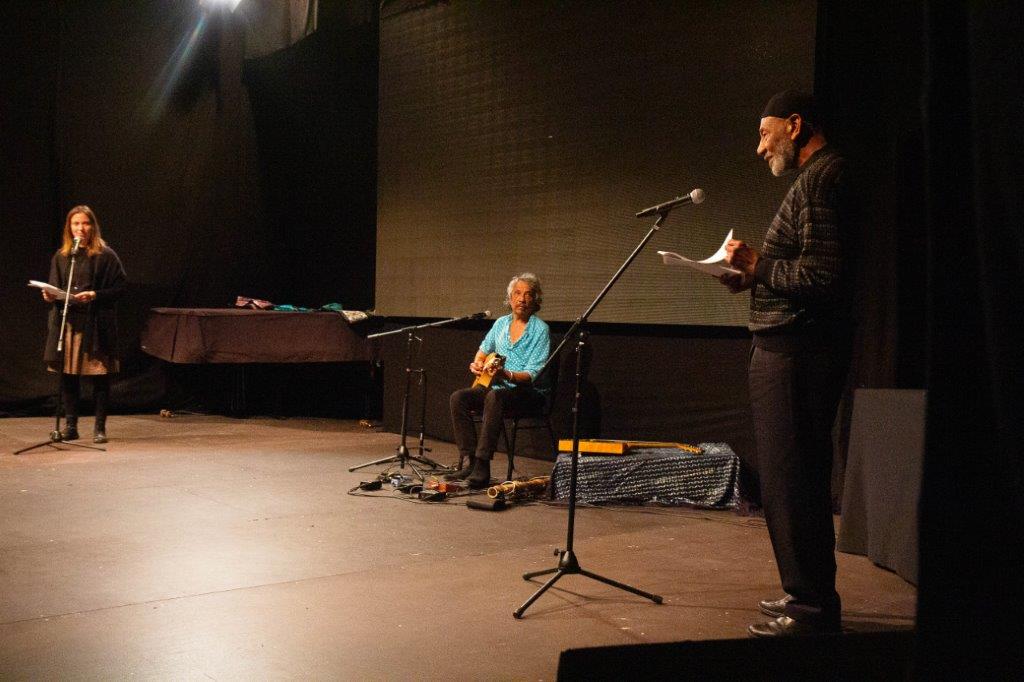 For the next segment, Kenyan poet and scholar Abdilatif Abdalla and Clarissa Vierke impressed the audience with an extraordinary performance. They read Swahili dance poetry from the beginning of the 19th century, on whose translation they have been working for some time with a whole group of experts. The poems, which are rich in images, have been preserved in manuscripts in Arabic script in European and East African archives, but above all they reflect performative poetry, music and dance culture of the western Indian Ocean in the pre-colonial period. They also particularly raise questions about mediality – language, writing, performance – and diaspora – Ngoma dance culture and its wide dissemination throughout the entire Indian Ocean region. With Abdalla reading in Swahili and Vierke in English, the poetry recital, which went back and forth between the two like an exchange of blows in a western, was made even more dramatic and remarkable by the musical accompaniment of Tao Ravao. 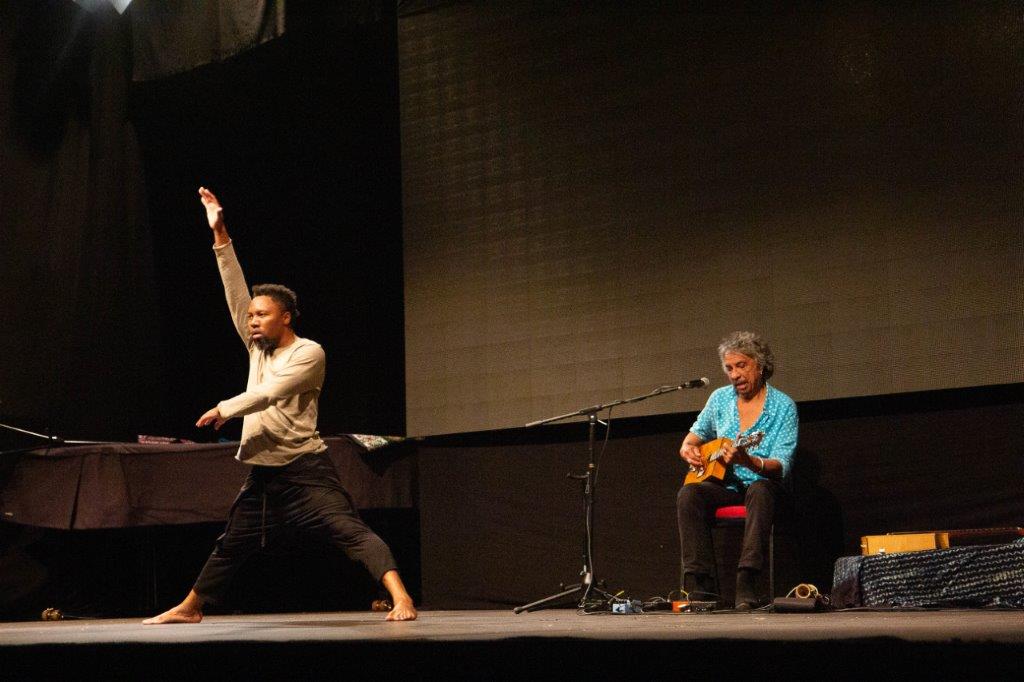 Ravao also musically accompanied the act that followed: a dance performance by Mozambican dancer and choreographer Luis Sala. To the sounds of Ravao’s kabosy, Sala impressively interpreted the music with dance and gestures. Sala, whose 25-year long career includes a 10-year stint with the renowned National Dance Company of Mozambique, based his performance on a film clip entitled “Polyrhythmic gestures”. The film that was also shown to the audience, was conceived by Ute Fendler and Luis Sala in the context of Fendler’s project on Relational imaginaries linking Mozambique with the islands of the Indian Ocean. 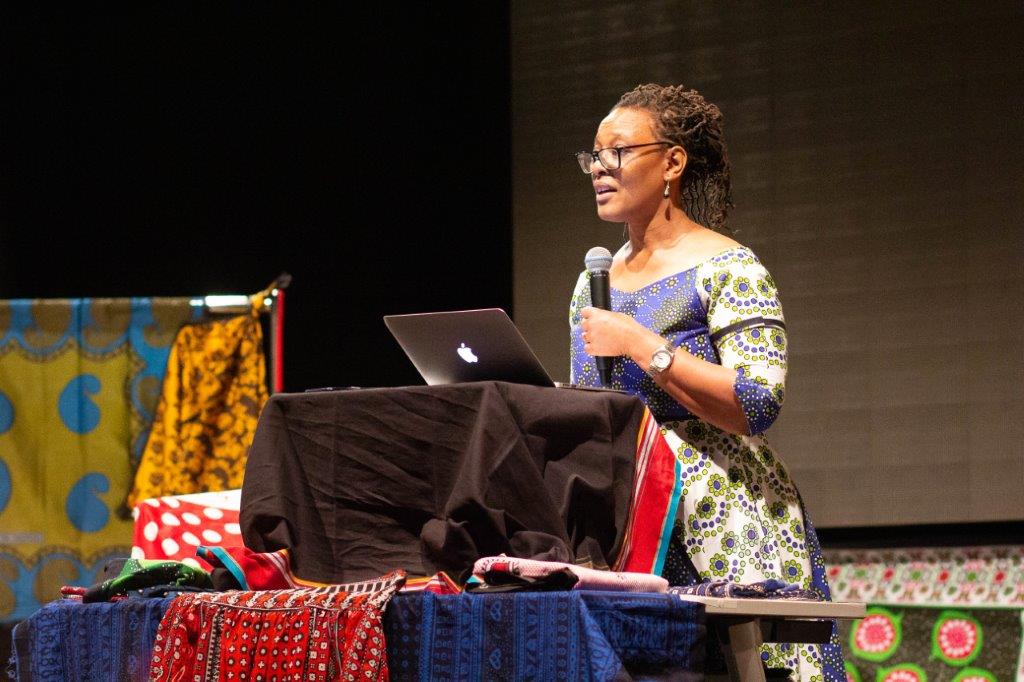 After a short introduction by ACC Moi director Peter Simatei the audience was presented another highlight of the day. In her engaging and entertaining performance lecture Mshai Mwangola entitled "Hadithi Njoo: Leso as Palimpseston" talked about the history of the evolution of leso as well as some of the social, cultural and political uses of this textile. There is no single textile so intimately associated with the Eastern African region,particularly the nations of Kenya and Tanzania, as the rectangular pieces of cloth known as leso (also known as kanga). Popular discourse and much academic research on its origin focus primarily on its emergence in the latter part of the nineteenth century to the Swahili Coast seaports of Mombasa (historically known as Mvita) in Kenya and Unguja (the main island of Zanzibar) in Tanzania. In the century or so since then, leso has become ubiquitous in these two countries, and is also found in many others in the eastern African region. The talk explored three reasons for which leso is famously celebrated as “the cloth that speaks”. First is the fact that the majority bear a prominent pithy legend inscribed in writing as a prominent feature of the design. Secondly, leso has played a historic communicative role in several East African communities inclusive of, but far beyond, the Swahili. Leso ‘speaks’ in a third way as a palimpsest that gives us a glimpse into centuries of the rich history of the Indian Ocean world. 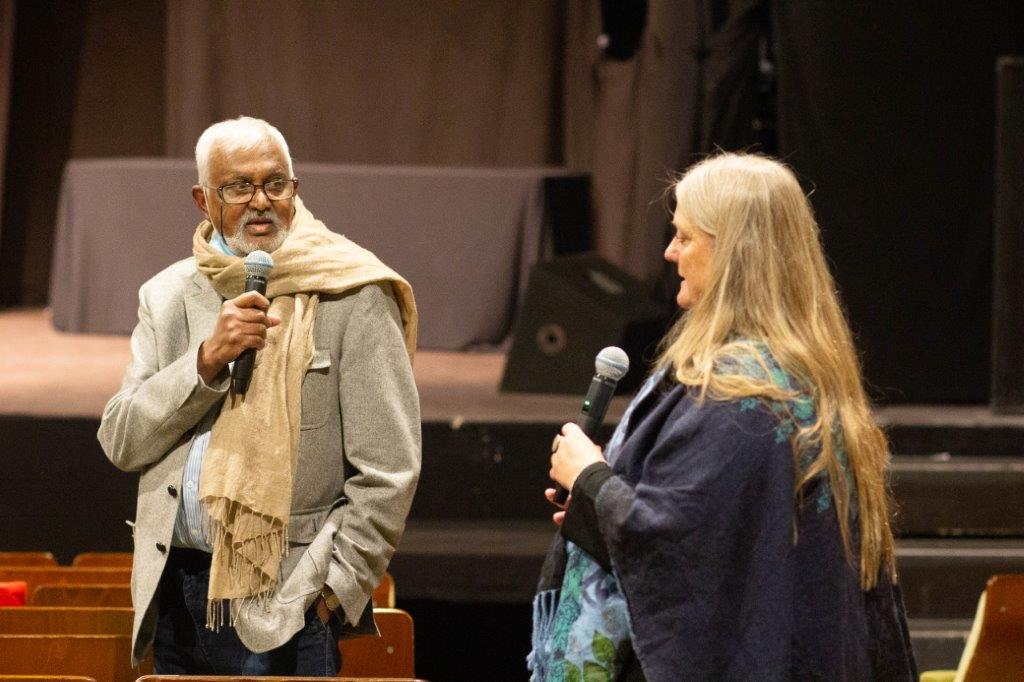 The eventful day ended with the screening of the film "Draupadi's Veil" by director Harrikrisna Anenden, who was also in attendance. By showing the movie on a mother's sacrifice to save her son who has come down with a serious case of meningitis, the photographer and filmmaker from Mauritius presented a world premiere to the Bayreuth audience. Afterwards Anenden, who received his training in Nairobi, Antwerp
and London, answered questions from the audience on the making and subject of the movie. Harrikrisna has only been working as a filmmaker since 2005 and has since then directed both documentaries and feature films across Africa and in India, such as the award-winning feature films The Cathedral (2006) and The Children of Troumaron (2012, co-directed with Sharvan Anenden), which are both based on the writings of the Mauritian author Ananda Devi and portray life in Port-Luis – the capital of Mauritius.

For a sample of the afternoon watch Clarissa Vierke, Tao Ravao, Abdilatif Abdalla and Luis Sala in the video below.

In order to show videos we use the services of third-party providers. These providers can collect data about your activities. Further details can be found under “Learn more”.
Learn more Load Content
Facebook Twitter Youtube-Kanal Instagram Blog UBT-A