Camps are by definition characterized by exceptionality and ‘indeterminate temporariness’ (Turner 2016). Governments or humanitarian organizations establish camps as exceptional measures with no intention of keeping them permanently. Even when some camps exist for decades and urbanize into ‘city-camps’ (Agier 2002), the ‘possibility of closure is a constitutive element of the camp’ (Weima & Minca 2021). After the closure of camps, some of the histories were forgotten when the personal memories moved with the camp inhabitants elsewhere. The campsites fell into ruin, were dismantled, overgrown, or buildings were repurposed for other tasks. However, at some sites, former inmates or neighbours began to commemorate the history of those interned, imprisoned or sheltered through monuments, commemorative plaques or exhibitions. Sometimes, the camp dwellers erected these signs of memorialization already during their stay or when leaving. At other times it took years or decades until people began to excavate and commemorate the camps’ existence and their often tragic histories. Often, the focal points of commemoration were the dead who transformed these temporary places into final destinations. Their human remains, tombstones and graveyards are witnesses of the existence of concentration, internment or refugee camps around which the memorialization takes place.

By bringing practitioners and scholars from various former campsites into dialogue, we want to map out how camp histories are remembered differently in varying contexts. We want to underline the agency of the former camp inhabitants in defining what is remembered and the constraints they encountered. Most camp histories are closely connected to conflict and suffering, making their memorialization contested politically. The often transnational nature of camps put these sites into tension with diverging national histories. We will debate how memory initiatives can be understood through the lens of medialities, viewing the material objects and sites as media in writing history. We want to interrogate how virtual and material objects and place-making mediates camp histories. What are the histories they become embedded in? What do they tell us about the former camps and the temporality of camps in general? What should we learn from these memorials? What is remembered and which past becomes ‘silenced’ (Trouillot 1995)? How do memorials mediate, contest and/or (re-)define collective memories?

Moving memories - Memories on the move? Displaced Persons, networks and remembrance. The Flossenbürg and Ebensee case (1945-1947)

The mainly Polish Displaced Persons (DP) in Flossenbürg (Bavarian Upper Palatinate, Germany) can be understood as actors of transnational, memory-cultural processes of the period after World War II. They had to live on the grounds of a former concentration camp. Despite of language barriers, their marginalized position, and limited political influence due to their DP status, as well as resentment by local residents and the Allies, the DPs built up networks, took advantage of opportunities for action, and became energetic „ remembrance actors”. They formed a community of memory and fate – as well as conflict – and built one of the first concentration camp memorials in the German-speaking world, even though the majority of those involved had no experience of persecution in the Flossenbürg concentration camp. Rather, they were survivors of various concentration camp and other groups who were there by chance and did not intend to stay permanently. The cooperation, which was full of conflict, and was built up on a divers network involved others: especially from Ukraine and the Baltic States, as well as German former persecutes and officials. The dissertation focuses on the “remembrance activists” and their network.

This paper discusses the memorialisation of the former Polish refugee camp site in Mbala, Zambia, by community members and the community museum, the Moto Moto Museum. In August and September 1943, more than 550 Polish refugees/immigrants arrived in Abercorn, Northern Rhodesia (now Mbala, Zambia). The Polish refugees were taken back to Poland after the Second World War and the camp was formally disbanded by 1950. The arrival of the Polish refugees in Abercorn was part of the deportation of Polish people from Russia and Germany following the signing of the Polish-Soviet Pact of 1941. This paper demonstrates that while the site of the former camp is not formally protected and memorialised by the Central Government in Zambia, it is memorialised by the local community in various ways like preservation of some portions of the site, naming, and local narratives. This localised memorialization of the Polish refugee site is also done through programs of the local museum, the Moto Moto Museum, through research, museum education and exhibitions. Thus, despite the lack of official memorialisation from the Central Government, the Polish refugee camp site in Mbala remains firmly embedded within the local history and culture of Mbala district. 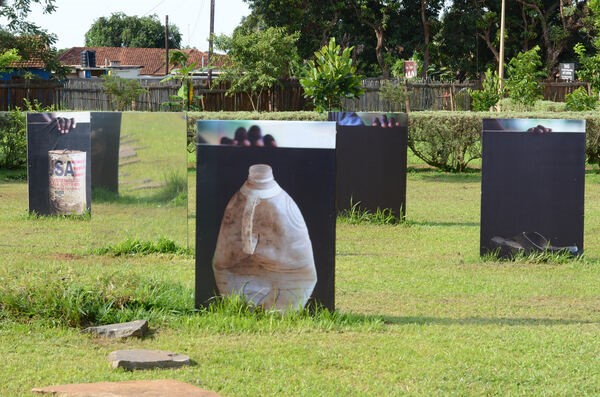 The Things We Left Behind: connecting humanitarian histories, memory, and displacement in Northern Uganda

The memory of protracted displacement can be understood through the material afterlives of war. This contribution examines objects that were left behind in displacement camp sites once they were disbanded. The objects and their specific biographies become a centralising point for memories to collect, while offering an understanding of the lived experience of displacement. Analysis of the artwork Gang Kikome and Other Things We Left Behind highlights the relationship between national, humanitarian, and cultural memory in Uganda. This artwork-as-archive features the collections of items that were used by the inhabitants of the displacement camps - during the war between the Lords Resistance Army and the Government of Uganda - but that were left behind once the camps closed, and reside in museum or memorial collections.  As a scholar and artist we illustrate the issues embedded in memorial processes whereby some choose to remember through the objects and others have commented to erasure of the displacement past. In examining the materiality of humanitarian aid, the contribution shows the interlinked cultural heritage that has emerged from war, one that is co-owned by those organisations who distributed the objects, those users who were displaced and the artists who work to archive the past.

Digitally Mapping Sites and Stories of the Mau Mau Conflict, 1952-1960

Villagisation was a major element of the British counter-insurgency campaign tackling the Land and Freedom Army, who were later labelled ‘Mau Mau’, in Kenya during the 1950s. The colonial government developed the policy in 1953 and introduced it widely in 1954 forcing mainly the Gĩkũyũ, and Gĩkũyũ-speaking Embu and Meru districts into 854 enclosed camps. The vast majority of those villagised were women, their children, and elders. Oral histories and written testimonies from survivors of this process reveal that the camps introduced during villagisation were spatial formations of fear and terror. As Francis Kanyua, an inhabitant of a camp in the Kabete region of Kenya, reveals, ‘there was no mercy’ in these spaces. In attempting to demonstrate the levels of violence that characterised the British campaign in Kenya, scholars have worked to expose the methods of brutality deployed and the ways that the colonial government sought to bury this evidence. While this work is vital in understanding the wider nexus of colonial violence, only an intimate exploration of the suffering experienced and remembered by those forcibly resettled exposes how pervasive and gendered this coercion and force was. Women and their children largely inhabited these spaces. The administrative discourse may have been that these were reformative sites to protect these civilians, but the experiences of female occupants tell a far more violent story. The punitive nature of these sites is most pronounced when the memories of those relocated, in relation to the space they occupied, are compared to the spatiality of the camps. These spaces were sites where colonial actors negotiated for control of places, bodies, movement, resources, and identities. We can geographically map this gendered topography of terror in the camps through the memories of the women who suffered inside them.

Since 2018, researchers at the Museum of British Colonialism have sought to document, make visible and elevate marginalised histories relating to Britain's colonial conquests. A key aspect of this has been to digitally map and reconstruct detention centres and work camps implemented by the British to quell the Mau Mau insurgency. We are now preparing to launch our new digital map of a villagisation camp, and this paper will explore this example which hopes to further contribute to the memorialization of this conflict in Kenya.