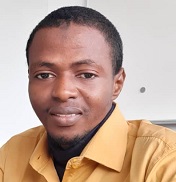 Hamissou is a doctoral student in the project Religious Engineering, the Making of Moralities, development and religion in Niger within the Africa Multiple Cluster of Excellence, University of Bayreuth under the supervision of Pr. Dr. Eva Spies and Pr. Mahaman Tidjani Alou (Abdou Moumouni University).

I joined the team in January 2020 after completing a master’s degree in sociology of education and participating on several research projects in Niger. My master’s thesis was about the use of ICT among students in the faculty of arts and humanities of Abdou Moumouni University (Niamey, Niger). My research experiences are about the issues of Violent Extremism and Radicalisation, Slavery, Poverty, Health, Open Science and cognitive justice in Niger.

Religious activism and visions of an ‘‘otherwise’’ society in Niger

Summary of the project:

In my doctoral thesis, I describe and analyse the project of social transformation pursued by a Salafist association in Niger. In order to achieve this objective, the study explores the explicit and implicit visions of a ‘‘different society’’ expressed not only in official documents of this association but also in the activities they are carrying out.

The study does not take these visions of an ‘‘otherwise’’ as given, but as dynamically emerging and shaped through the transformative actions implemented by the association. This research pays particular attention to the terminologies used to designate the expected results of their actions as well as the forms of commitment to act and change the Nigerien society which are observable in the Salafi associative milieu in Niger. The research accounts for the gendered dimensions that permeate processes of social transformation and the position of women as promoted in the explicit and implicit visions of a “different society” in Niger.

This PhD project is part of the research project “Religious engineering: the making of moralities, development and religion in Niger” within the Africa Multiple Cluster of Excellence.